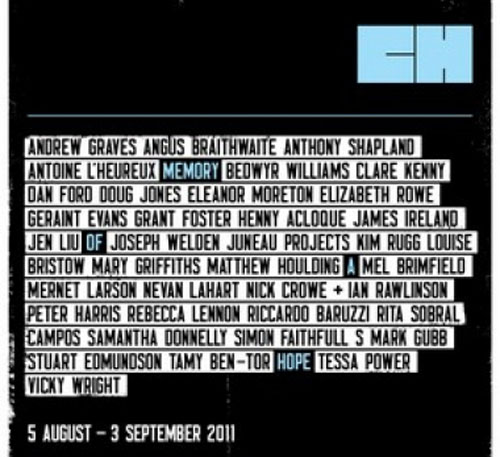 5 August – 3 September 2011 at Ceri Hand Gallery. ‘Memory of a Hope’ exhibition by 36 artists and over 100 art works, including film, photography, painting, sculpture, text and audio work – much of it seen for the first time in the UK.
Viewing: Thursday 4 August 18-20.00

“Ideology collapses and vanishes, utopianism atrophies, but something great is left behind: the memory of a hope”, Henri Lefebvre.

Devised with gallery artist Matthew Houlding, this summer exhibition draws on a key text by Henri Lefebvre and the autobiographical writing of JG Ballard, reflecting spaces caught between construction, destruction and nostalgia.

Each gallery artist was invited to select two artists in response to Houlding’s concept. The resulting exhibition includes 36 artists and over 100 art works, including film, photography, painting, sculpture, text and audio work – much of it seen for the first time in the UK.

Rita Sobrol Campos’ The Last Faust Myth In The History Of Mankind (2009) is a C-print of a text produced on an old Olivetti typewriter, on which geometric designs overlap and mask aspects of a script that brings together the 20th century writer Fernando Pessoa and his multiple alter egos; the great con-man Arthur Alves dos Reis, whose fabricated life nearly bankrupt the Portuguese state; the 15th century heroine Joan of Arc and Bandarra, a popular prophet from the 16th century obsessed with the mystical 5th Empire. Regardless of the time lapses and geographic distances, the characters are able to interact via the classic science fiction travel method – the teleporter.

In Yid (2010), Tamy Ben Tor performs to camera as a grotesque amalgamation of a male Jewish character (complete with fake, disintegrating moustache, eyebrows and putty nose), spitting about his greedy wife, simultaneously embodying and portraying a racist, sexist, xenophobe, absurdly reflecting the artists profound mistrust of image and language to convey any kind of truth.

Angus Braithwaite’s life size photograph Portrait of the Artist as Avant-Garde (2011) depicts the artist in a hand made uniform of the Brunswick avant-garde (a Napoleonic Prussian regiment that fought in Waterloo). Founded in performance, Braithwaite’s work explores how documenting tools such as print, film, sculpture/artefact or photography alter our reading of the original or true event and examines the line between myth and reality.

John Moores 25 prize-winner Grant Foster’s characters bear witness to humanity at its most extreme, within paintings indicative of barbaric practices like butchery and torture. His subjects have included soldiers and martyrs, victims and villains. Relic (2008), one of his paintings in the show, has eyes made from coils of braided hair found on the street, the nose a hollowed cavern, and the mouth a reckless red-grin.

James Ireland’s sculpture, Scenic View, Mountains (2011) abstracts and reduces the language of natural forms to its simplest expression, manufacturing epic visions of landscape that withhold their inherent promise of the sublime.

Riccardo Baruzzi’s candy coloured racked abstract paintings Untitled, (2011) allude to the agency of desire and both the weight and potential freedom inherent in the language of abstract painting, each work echoing the last and in the shadow of the next.

Rebecca Lennon’s audio work The Scream (2011), hypnotically relays the words ‘Now’ or ‘The Now’ extracted (in order) from self help guru Ekhart Tolle’s online audio exercises, played out via an Apple speaker. Lennon toys with the slippery relationship between cult, commodity, spirituality, authority/manipulation and madness.

Matthew Houlding presents a photograph of a swimming pool in East Africa that he swam in as a child, Kilimanjaro (2011) alongside a major new work: A Reproduction of One of the Twelve Decorative Columns Located Within the Casino of the Oceanic Hotel. Designed by Walter May, 1956 (2011) – a giant totem to the past and memorial to the future. 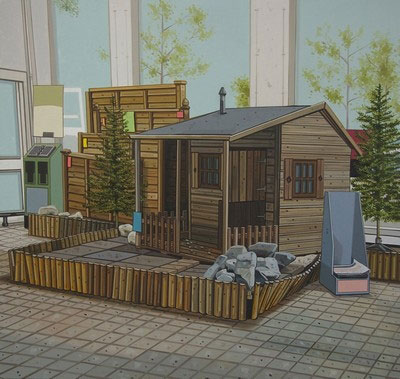 Ceri Hand Gallery – If You Can Hold Your Breath