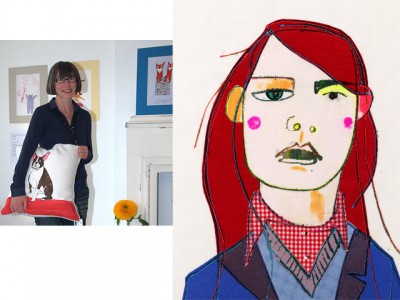 As part of Bluecoat Display Centre’s ongoing programme of exciting artist’s talks, the next event will feature local textile artist Rachael Howard. Rachael will speak about her artistic career as a designer/maker.

Rachael has been a successful practicing textile artist and designer since leaving the Royal College of Art in 1992 as one of the first post graduate students of Embroidery.

Since then, she has become one of its most respected practitioners. Her graphic, lively sketches of everyday life typify her powers of observation and knack for catching the moment. She has pioneered a lively mix of embroidery and screen-printing techniques, using image, text and object to tell – often autobiographical – stories of the everyday.

She has also worked as a freelance designer and illustrator for many companies including Paul Smith, Habitat, Liberty and magazines such as Selvedge.

A traditional afternoon tea in the grand setting of The Athenaeum Club will follow the talk! This event is open to current and new subscribing Friends of Bluecoat Display Centre and The Athenaeum.

Booking: As places are limited, to book a place for the event please call Bluecoat Display Centre on 0151 709 4014 or email crafts@bluecoatdisplaycentre.com.