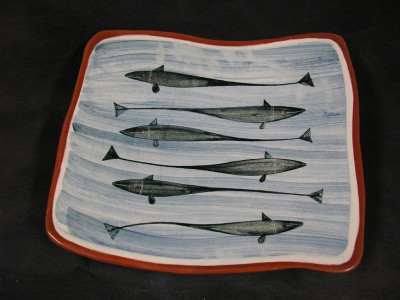 Having trained as a potter, James Campbell had by the mid 1970s become part of the movement towards sculptural ceramics, in which Gordon Baldwin, who taught him at school, was a central figure. Slab built constructions of buildings, simplified representations of fortified habitations, may now seem far removed from his current work with its more romantic reflections on landscape. In fact it is possible to trace a continuous line in which the recent work develops ideas that had begun to be explored in these earlier pieces.

During a period in the early 1980s when he had no access to a workshop, he drew a great deal; landscape, architecture, people and birds. A move to a new house had the very practical result of reintroducing him to the domestic vessel. He moved from making the smaller domestic pieces to consider larger platters and bowls, and as a natural result of the time he had spent drawing, he applied his draughtsmanship and colour to these.