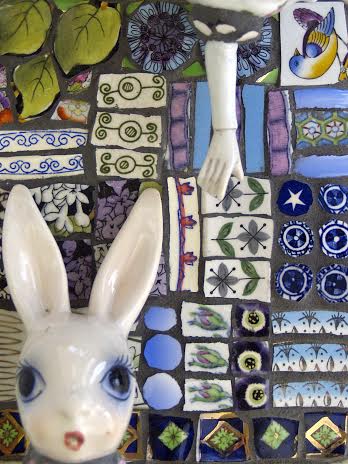 This new show in Liverpool is a development of a joint show Cleo had 50:50 Inspired by Japan: Mosaic Textiles and Paper which was the result of a trip to Japan with her husband, the textile artist Matthew Harris, in 2010.

Mosaic mutants with teacup bodies and parrot heads, inspired by the Japanese mania for mobile phone charms, sit alongside more traditional wall-mounts of kokeshi dolls and shrines. ‘Japan is such a modern culture, and yet it’s got such an ancient culture within it. I loved all the mass-produced imagery,’ she says.

Cleo Mussi is an established Mosaic Artist and respected within the Applied Arts both Nationally and Internationally. Originally training at Goldsmiths in the late 80s she graduated from the textile department run by and a team of practicing artists and technicians who were knowledgeable and passionate about materials techniques and process. This quiet evolution in her working practice shows how the processes in her work have developed and matured with an obsessive emphasis on ‘Making and Materials’. Her interest in recycled fabrics, knowledge of pattern, print, weave and stitch translates easily into reclaimed ceramic

Cleo Mussi is known for her humorous twists and attention to detail as observed in her solo touring installations: ‘The Crowd’, ‘A-Z- a hand book’ and ‘Pharma’s Market’-A live stock and produce show’.

She has also completed a number of large commissions for public spaces including The John Lewis Partnership in Solihull and The BBC Asian Network in Leicester.

For further information contact Samantha Rhodes by email at crafts@bluecoatdisplaycentre.com