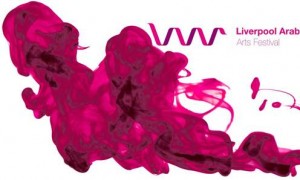 A major commission curated by Danah Abdullah that plays with the format found in old board games and children’s books. Arab designers are invited to imagine new worlds through one of eight prompts. Themes include transportation, the future, urbanism, lifestyle, and current affairs. Devised especially for the bluecoat’s public spaces. www.kalimatmagazine.com/atelier

In collaboration with DaDaFest, British Council and Arts Council England. Rachel Gadsden’s methodology of creative engagement and delivery articulates the notion that, whilst acknowledging political and religious differences, arts and culture can serve to promote a common ground for discourse and development. Her work explores themes of fragility and resilience, and the universal and deeply positive desire to survive. Countries involved in this exhibition: Bahrain, Oman, Saudi Arabia and Qatar.

An eagerly anticipated event for all the family, join us for an exciting day of music, food and more featuring DJ Funky Pharaoh with a mix of Arabic and house rhythms, Amira Kheir with an enchanting blend of jazz and soul and fresh from the Royal Albert Hall, Maya Yousseff. The Al Awadhel Band also bring their sound to the day and Danah Abdulla will give two curator-led guided talks.

A feel good documentary about a group of older musicians coming together. Those in France leaving Algeria are haunted by memories of a lost home and those in Algeria are faced by daily reminders of the ghosts of violence. This simple story transcends cultural boundaries and cultivates a strong sense of hope and happiness.

8 June: Hassan Abdulrazzak: A Fire Blazing Brightly
17.00
Tickets £5/£3 from www.thebluecoat.org.uk or in person at the venue

Award winning playwright Hassan Abdulrazzak presents an exclusive reading of scenes from his new play: Visual artist, Rana is missing in Baghdad. She returned to Iraq to investigate her father’s past. Did he fight against Saddam or was he complicit? Rana survives the bombing of Al-Mutanabbi street, the famous booksellers’ market and co-creates a provocative piece of art challenging the darkness engulfing her country. Will Rana succeed in creating the positive change that eluded her father? And what revelations will she uncover about him in Baghdad?

Festival-long thought provoking debates on current affairs, culture, freedom and change in the Arab world. Hear from people who are directly involved and have your say too. Taking place each day at 17.00.

Join us for this exciting book launch. The Book of Gaza brings together ten fiction writers in a unique anthology presented in English translation for the first time. Go beyond the global media coverage of Palestine and discover much more. Contributors range from acclaimed authors to exciting fresh voices and a new generation of award-winning young writers and journalists. Edited by Atef Abuseif

It’s 1967. At the height of new styles, new thinking and new sounds wider changes are happening in Jordan. Refugees are pouring across the border from Palestine. Young Tarek and his mother are amongst them Tarek struggles to adjust to life in a refugee camp and longs to be reunited with his father so he seeks a way out. His adventurous nature leads him to a group of people on a journey that will change all of their lives.

A facilitated Skype conversation with Yemeni writer of A Land Without Jasmine, Wajdi al-Ahdal 2014 winner of the Saif Ghobash Banipal award for translation and the editor of Banipal, Samuel Shimon.

Simona Abdallah is one of few professional female darbuka players. Self taught, she has been playing since her teens. She works as a soloist and has performed with Natasha Atlas and other performers and dancers. Recently returned from tours of Singapore and Kenya, join her in this fantastic workshop for all abilities

This Oscar nominated film set in Saudi Arabia concentrates on a young girl who wants to buy a bike, in a society where bicycles are deemed dangerous to a girl’s virtue. The film breaks many barriers, set against a background where women are not even allowed to drive, follow Wadjda in her boundary breaking journey.

Since March 2011, self publishing Syrian writers and artists have formed anonymous artists’ collectives, here they present readings, screenings and discussion. This lively event marks the publication of Syria Speaks: Art and Culture from the Frontline, a unique anthology of literature, art and culture which acts as a window onto their creative endeavours. Presented in partnership with Reel Arts, Saqi Books, English PEN, Prince Claus Fund, CKU and the Arab British Centre.

After their sell-out show last year, Diwan are back to weave lyrical storytelling with musical wiles in a new show based on Fadi Azzam’s novel Sarmada*, long-listed for the Arabic Booker Prize in 2011. Far from this world lies a village effervescent with surreal magic, where sex and fantasy, transmigrating souls, potions and soothsayers conspire to bring a remarkable contemporary of the Arabian Nights. With effortless dexterity and an easy style, Louai Alhenawi and Alia Alzougbi create another explosive performance.

*Sarmada is a word created by the author, a derivative female form of the noun-verb ‘to perpetuate’ or ‘perpetual’. The title places women at the heart of this story that spans several generations, from Syria to Paris and back again.

the Bluecoat: Philosophy in Pubs

The Bluecoat: La Carta: The Letter Written and Directed by Francisco...