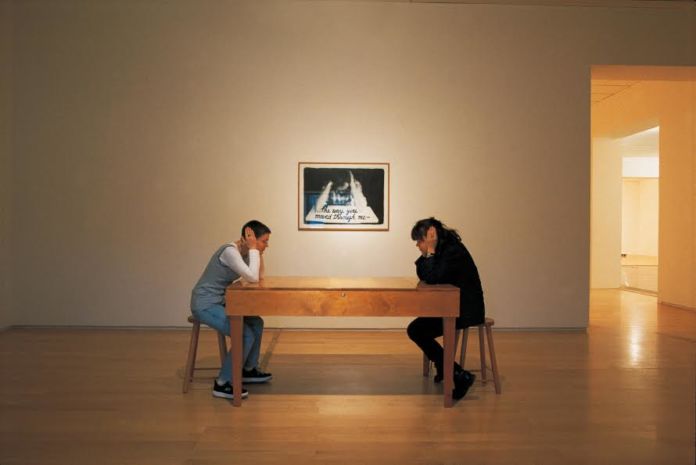 A conversation between an e-cigarette and pat of butter, the seductive call of sirens, and the unique sound of South Korea’s female pearl divers all feature in Listening at the Bluecoat from January 2015. Presenting the work of 17 international artists who explore the act of listening in contemporary visual art, Listening is the latest Hayward Touring Curatorial Open exhibition. It was selected by the Bluecoat in collaboration with BALTIC 39, Newcastle upon Tyne; Site Gallery and Sheffield Institute of Arts; and Norwich University of the Arts.

Curated by artist Sam Belinfante, Listening examines the crossover between the visual and the sonic, with many of the selected artists working in the fields of both contemporary music and art.

The exhibition features a variety of media, from drawings and sculpture to prints and video, with works ranging dramatically in duration from less than a second to six hours. Listening is ambitious in its curatorial approach, orchestrating the works so that visitors are guided through the exhibition and works are allowed to ‘speak’ in turn.

Highlights include Prem Sahib’s throbbing, inaccessible disco and Hannah Rickards’ Thunder, a clap of thunder that has been stretched in duration and aurally dissected, recreated by musicians and morphed back into a thunderclap.

A new work by Turner Prize-winner Laure Prouvost choreographs a dialogue between lights and objects in the exhibition while Katie Paterson presents the almost inaudible sound of a dying star. Winner of the Nam June Paik Art Center Prize 2014, Haroon Mirza’s insulated ‘anechoic’ chamber silences the outside world, Ed Atkins presents new drawings made in response to the exhibition, and Janet Cardiff and George Bures Miller allow us to eavesdrop on a cabin in a forest, where we hear the sound of car doors being slammed, raised voices, shattering glass and gunshots.

The exhibition will include Liverpool-based artist Imogen Stidworthy’s rarely seen work The Whisper Heard, and Laurie Anderson’s seminal work The Handphone Table which allows visitors to conduct sound through their bones.

Curator Sam Belinfante said he wanted to ‘create an exhibition that interrogates the act of listening itself, rather than merely its aural objects’: Listening engages the body in a multitude of ways; from the intimate pressing of an ear to a wall to the staggering din of a thunderclap that knocks you off your feet, listening is not only the exhibition’s subject matter but also the method by which works are encountered and explored. I want visitors to be playfully arrested and surprised by the ways in which they are directed around the space and through the many different works on display.”