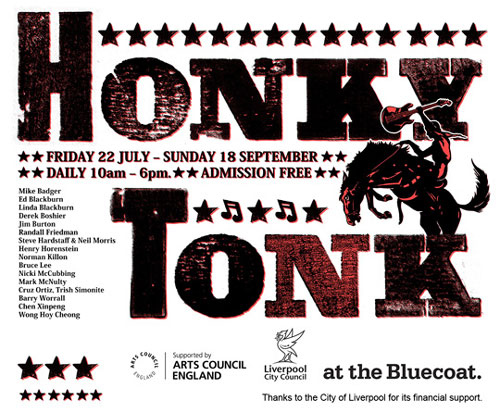 Honky Tonk is an exhibition that investigates the country and western aesthetic found both in the music and popular culture of Liverpool and the United States – the original home of the honky tonk. These traditionally rough establishments offer cheap drinks, food, live music and dancing for a working class clientele, and over time they have been immortalised by iconic songs such as Hank Williams’ Honky Tonk Blues and Gram Parsons’ Close up the Honky Tonks.

According to music historian Kevin McManus, Liverpool has been the ‘Nashville of the North’ since the 1950s. The city benefitted from transatlantic shipping traffic, as sailors and travellers brought home records from the United States that were hard to find in the UK. Even the Beatles embraced country music in their early recordings. Burtonwood, a nearby American airforce base, also made a crucial impact bringing the city into direct contact with music from the Southern states and spawning home-grown country from the likes of Hank Walters. Performers like The Hillsiders and Birkenhead’s Charlie Landsborough carried on that tradition, whilst the connection to Texas continues today with local musicians like Mike Badger who regularly plays at the SXSW showcase in Austin.

The stories and the group-participatory nature of country music, plus the glamour of Western fashion, made Liverpool’s country scene thrive. An energetic fascination with cowboy culture in the city is also evident: Buffalo Bill visited in 1891, and in the 1950s Roy Rogers stayed at the famous Adelphi Hotel with his horse, Trigger. In the 1950s and 60s, pubs along the dock road were the equivalent of the honky tonks you might have found in Texas or Tennessee.
Honky Tonk, the exhibition, draws similarities between Liverpool, Austin, Nashville and other American cities. Artists from both sides of the Atlantic and beyond bring together art, music and the honky tonk flavour, providing a contemporary response through painting, video, photography and installation. Infused with irony, humour and playfulness, the show explores pleasure through language, behaviour and the DIY nature of entertainment. Also included is archival material provided by local country fans, reflecting a fascination with cowboy culture, Western films and, naturally, music.

Highlights of the exhibition include:
Honky Tonk Women, an installation commissioned by the Bluecoat by Liverpool artist Nicki McCubbing, based on the lives of legendary country singers Loretta Lynn, Dolly Parton and Tammy Wynette.

A new film and silkscreen print installation by Texas artist Cruz Ortiz which he describes as a “fake intergalactic country and western love story.” Honky Tonk is Ortiz’s first exhibition in the UK.

New photographs by Trish Simonite commissioned by the Bluecoat featuring famous Texas honky tonks alongside well known Liverpool pubs and music venues such as Smokey Mo’s and the Jacaranda.

Objects from the private collections of Adrian Henri and Norman Killon, never publicly seen before, that include cowboy and country and western memorabilia from the 1960s and 70s.

Hobo-inspired portrait drawings by Texan artist Bruce Lee, who is also exhibiting in the UK for the first time.

Ashtrays & Tables, a short film by Mark McNulty that traces the journey of famed Liverpool musician Mike Badger, as he travels to Austin and Nashville to play country music and form a band.

A unique showing of Wong Hoy Cheong’s behind-the-scenes film that documents the making of Trigger, his video commissioned for the 2004 Liverpool Biennial, based on a re-enactment of Roy Rogers visit to Liverpool in 1954. [During his visit, Rogers, known as the “Singing Cowboy”, his wife Dale and his horse Trigger all stayed at the Adelphi Hotel.]

The Bluecoat: Music in the Garden: The Halcyon Syncopators

the Bluecoat: Art of Living the Experiment