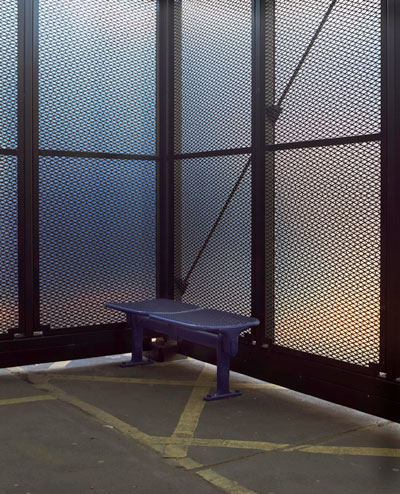 Seven artists from across the world will explore confinement in contemporary life at the Bluecoat between Sat 14 May and Sun 10 July as part of the city’s first ever photography festival.

The theme of Look 11 is ‘photography as a call to action’ – the role of photography in questioning, documenting and responding to global issues of social justice.
Four of the Bluecoat’s artists are concerned with the confinement of humans: Juergen Chill’s photographs of German prison cells are architectural studies of the physical space prisoners inhabit; Edmund Clark’s photographs of Guantanamo illustrate three views of ‘home’ in the context of political imprisonment; David Moore explores surveillance through an investigation of Paddington Green High Security Police Station where terror suspects are held under the Counter Terrorism Act; and Ben Graville’s penetrating and provocative portraits capture prisoners being driven to and from the Old Bailey.

John Darwell’s new photographic series Dogs in Cages, commissioned by the Bluecoat, is an allegory on incarceration. Produced in cooperation with one of the North West’s largest dogs homes, the work highlights the nature and mechanics of captivity.

Dornith Doherty has collaborated with leading biologists to photograph at seed banks, including the one at Kew, responding to the collection process, containment of biological species and global efforts to insure against starvation. David Maisel documents cremated remains of psychiatric patients collected since the late 19th century. Abstract and elegiac, the photographs provoke discussion about loss, memory, confinement and mental illness.

Sara-Jayne Parsons, Exhibitions Curator at the Bluecoat said: “The work included in our exhibition explores several different interpretations of physical and psychological confinement in contemporary life. We’ve tried to create juxtapositions within the show that will lead our audience to consider the complex relationship between justice, ethics, a duty of care and compassion – a fundamental relationship that affects “captives” and “keepers.”

Look11’s Artistic Director, Stephen Snoddy, said: “Photography has the power to frame and represent debate, to capture events in a way the written word cannot. This summer we want people to think about how photography works as a medium. The message is ‘stop, think, examine and debate’.

As well as exhibiting works across Liverpool at the city’s largest arts venues and spaces by the UK’s leading photographers and artists we want people to pick up a camera themselves. Photography is increasingly democratic. We all have cameras in our pockets now, this summer we want to explore what they can do and what people have to say with their photos”.

Exhibition tour with the artists and curator
May 14, 2pm, Galleries, ticketed but free

Encounters with strangers features portraits of strangers – nothing unusual there perhaps. However instead of displaying these portraits in the traditional manner in a gallery, the photographer is using social media to let the public encounter each photo out on the street in the location where it was taken.

Anyone with a smartphone will be able to download a free map that takes them out of the Bluecoat and onto the streets of Liverpool and the Wirral to find the photographs. You will only be able to see each photograph and read about the person in it when you are in the right location.

Until 10 July (Extended) Daily 10.00am-6.00pm
Sharon Mutch: Solitary Sitting Rooms
In response to the confined theme, photographer Sharon Mutch, based at the Bluecoat, investigates voluntary and involuntary confinement. Her photographic installations look beyond the street to construct a narrative of interiors, concentrating on residents who are seldom seen. Here, the lens is not pointed at the confinee, but becomes their eyes, and what we view in the photographs are isolation, confusion, daydreams – instruments of contact with the outside world.  Everything is not as it seems, as we discover that interwoven within the photographs are portals to the past that create an escape from daily reality.
Free

the Bluecoat: The Art of Shopping Walking Tour