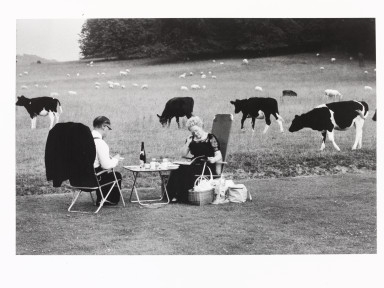 Exhibition exploring images of lives and landscapes in Britain at the outbreak of World War II.

The Recording Britain collection, housed at London’s V&A, is the result of a unique and ambitious documentary project initiated by art historian and broadcaster Sir Kenneth Clark, resulting in a collection of over 1,500 watercolours and drawings.

Strong echos from the past can be felt from Kenneth Rowntree‘s The Smoke Room, Ashopton Inn. The 1940 watercolour depicts the interior of a pub, located in the former Derbyshire village of Ashopton, which was deliberately flooded a few years later to make way for the Ladybower Reservoir.

In total, Rowntree completed a group of 15 works recording land and houses marked for submersion in and around the villages of Ashopton and Derwent. His 1940 watercolourGrainfoot Farm recorded another area of Derwent Valley landscape submerged by the reservoir.

Bryon Dawson’s 1940 watercolour of Downham, near Clitheroe, depicts the beautifully preserved 18th and 19th century houses of a village that time forgot. To this day, this Ribble Valley treasure features no electricity lines, aerials or satellite dishes, making it a popular location for filming period dramas.

Other north west landscapes preserved by the Recording Britain project include a 1943 watercolour of the Manchester Ship Canal by prolific amateur Albert Pile and Blackburn artist and engraver Wilfred Fairclough’s 1940 drawing of The Old Bull and Darwen Street in his home town.

Fast forward to 1983 and photographer John Davies has captured the four imposing cooling towers of Salford’s Agecroft Power Station. Demolished just over ten years later, HM Prison Forest Bank has since been built on the site.

The Atkinson: Programme of Free Talks