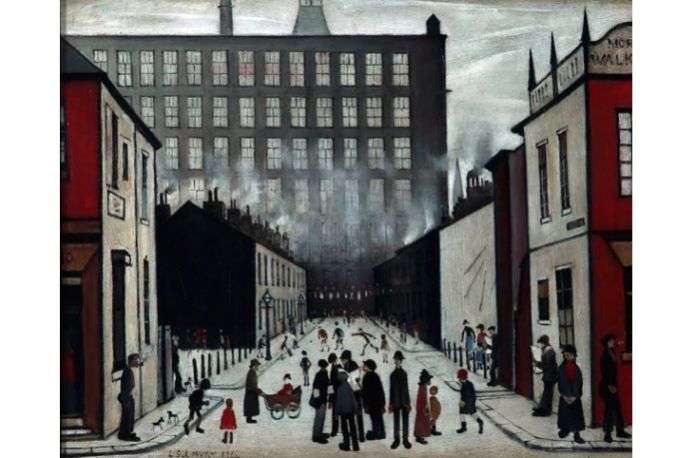 In 1951, a touring exhibition showcased the work of two important contemporary artists: LS Lowry and Theodore Major. Both were fascinated with the lives of ordinary working people and used their art to comment on everyday life in the industrial north. In the years that followed, one went on to become one of the UK’s most celebrated painters, whilst the other fell into virtual obscurity. Why?

This exhibition explores the extensive bodies of work left by two very different Lancastrians and looks at some of the reasons behind their diverging trajectories and includes loans from Manchester City Galleries, Arts Council England and The Lowry in Salford. One of the loaned artworks, A Street Scene (St Simon’s Church) 1928, was the first Lowry work purchased by Salford Museum & Art Gallery, as the painter’s reputation started to grow. 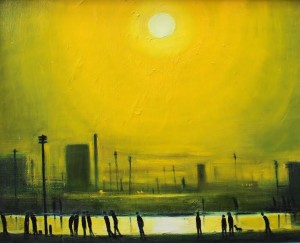 Major’s daughter Mary, an artist in her own right, has been involved with curating the show, alongside gallery manager Stephen Whittle. Mary believes her father’s time is yet to come and that his reputation as a painter is still on the rise. Through her interpretations, she draws parallels and highlights differences between the pair.

Lowry is famous for stylised pictures of coalmines, factories and terraced houses, which he referred to as ‘dreamscapes’ as they were largely drawn from memory. Not based on actual locations, they were however inspired by the streets of Salford and Pendlebury, where he lived and worked  – as a rent collector and property company clerk – for nearly 40 years. Lowry’s infamous ‘naïve’ figures are commonly referred to as matchstick men.

Active between 1928 and 1970, Lowry died in 1976 aged 88. By the time of his death, there had been many national exhibitions of his work and he was in talks with the Royal Academy about a major retrospective. In 2011, two works by Lowry each achieved £5.6 million at auction. Tate Britain held a major retrospective in 2013 and the first Lowry solo show outside of UK took place in China in 2014.

Born 20 years later in Wigan, Major, attended the local art school from 1927 to 1932, and taught there for 20 years until 1950. Reclusive in lifestyle, he used a small front bedroom of his Appley Bridge home as his studio and the next door property as a store for his paintings, which he was not keen to part with. It has been said that he would have been bigger than Lowry if he had sold his paintings during his lifetime, but he was passionately anti-commercial in his attitude to art and frequently declined to sell pictures, especially “not to the people who want them, the rich people”.

The Atkinson: The Shojo Manga: The World of Japanese Girls’ Comics

The Atkinson: Wish You Were Here?