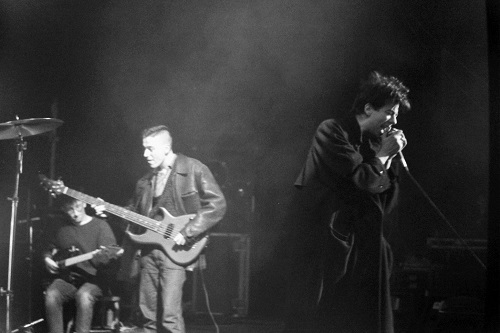 An exhibition of photographs from the early 1980s Liverpool music scene by Graham Smillie.

“Christmas 1980. Enthused by the burgeoning, post Eric’s music scene, I arrive in Liverpool. Armed only with enthusiasm, a love of the music and the vague promise of a job as a roadie for Pete Wylie’s WAH! HEAT, I pitched up in Matthew Street.

Taken in by some of the best people you could ever meet I quickly settled in. I started taking pictures with an old instamatic camera and later moved on to a Voigtlander 35mm film camera and then to a Practica SLR.

I never set out to show any of these photographs and until recently they remained in biscuit tins in a cupboard.”

The exhibition presents ten, 110cm X 70cm photographs taken from 35mm negatives of the early 1980s music scene. The exhibition includes images of some of the great musicians coming out of Liverpool at that time, artists such as Ian Broudie, Pete Wylie, Echo & the Bunnymen and the Pale Fountains will be on show. The exhibition also includes many smaller documentary images, recording the Liverpool music scene during that period.

A great exhibition for all those old ‘musos’ out there and for all the new and exciting young artists coming up, who have been influenced by the 80’s music scene.

Leaf on Bold St: Not The Arena Auction