Working in partnership with Arena Studios, Arena Gallery is a newly established venue which aims to promote and support local, national and international artists and creatives. The original Arena Gallery was housed in Arena’s old Duke Street premises and after an immensely successful Biennial 2006 exhibition; the Gallery became defunct due to Arena’s relocation. With relocation to the Elevator Building in Parliament Street and with thanks to dedicated funding from the Foyle Foundation, Arena is once again in a position to facilitate a Gallery Programme of exhibitions and events and is delighted to launch the programme with this exhibition.

Coller Elective presents the work of four contemporary artists who are working with the medium of collage in exciting and diverse ways. Intended to provide a loose overview of the high standard of work currently being produced in the medium rather than being a firm statement of the current position of collage, the artists who appear in this exhibition tackle the historical and current implications associated with collage in fresh and challenging ways. Amalgamating assemblage and three dimensional works alongside the flat image, the artists in Coller Elective create, select, manipulate and present a unique range of works that energise the selective processes that are the very foundations of collage.

Katriona Beales presents new work, the first piece in a new series of 3D collaged pieces entitled ‘All the worlds…’ Drawing inspiration from model-making for theatre, her childhood dollhouse and a treasure trove of early to mid 20th century photographs of Liverpool, Beales weaves these and other elements into 3D ‘sets’ or ‘worlds’. These point to both the seen and unseen, the fantastical and gritty reality, and question power dynamics of scale.

Fiona Curran utilises collage, often in three dimensional forms and installations, alongside colour, pattern and landscape imagery that creates artificial spatial planes that visually and physically reference utopian and dystopian scenes. Curran is interested in the use of light and colour present within her work, the seductive allure of this is intensified by her usage of illumination in her work, coupling this with explosive geometric bursts of colour, each layer of paper competing with the next. Fiona was part of the highly successful  )Bracket This(3 exhibition at Arena Gallery in Duke Street during the 2006 Liverpool Biennial.

Tracey Eastham constructs paper collages that are concerned with landscapes made up of stereotypes, representations, and metaphors that whilst being apparently false and superficial still conjure up passions of national and personal identity. Using references from the 18th century English school of romantic painting, portrayals of the ‘wild’ Western America, sci-fi and romantic book covers; her collages have a strong literary element – they are in effect story-telling yet there is an intriguing sense of depth through the flatness of paper and an oscillation with fantasy and reality.

Ben Washington is concerned with how people experience space both physically and conceptually. Washington carefully juxtaposes found and discarded materials to invoke new possibilities that dawn within his work as a result. His interest in landscapes creates many layers which bare visual reference to the material history, whilst the work itself often teeters close to seeming collapse. 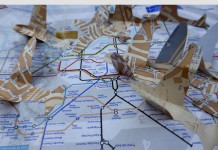 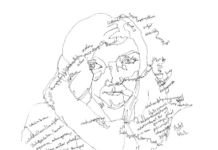 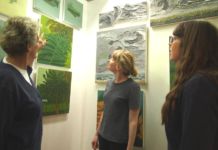 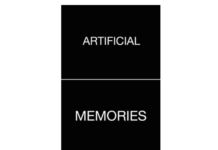 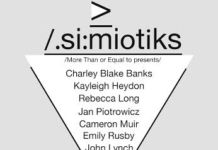 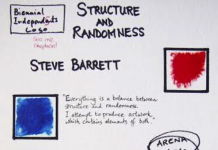 Arena – A Degree of Uncertainty