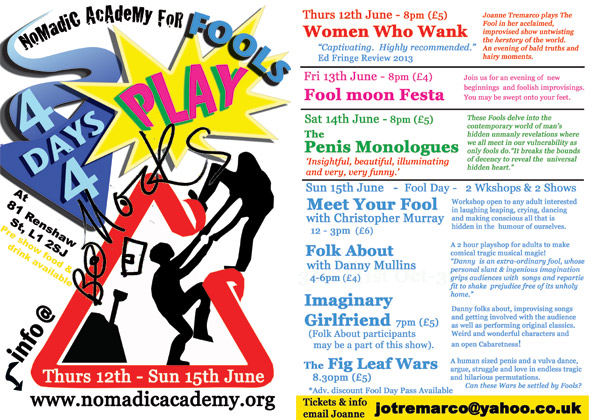 Tickets available on the door (half an hour before shows) or from the  Cafe 81 Renshaw St (11.00 – 16.00 Tues – Sun) in advance or reserve by contacting Joanne at jotremarco@yahoo.co.uk

The Nomadic Academy for Fools brings their unique improvisational theatre to Liverpool with Four Days For Play (their Quarterly Fool’s Festival).  To date the Festival has had two sell-out runs in Bristol and Glastonbury.

The Nomadic Academy for Fools is an itinerant collective of performers, spread across the UK, who come together to create shows and festivals throughout the year.

N.A.F’s Theatrical work makes use of ‘The Structure’, a device which enables them to create, meaningful tragical comical improvised shows that work closely with the audience. The structure was developed by 21st Century Fool and master of Improvisation, Jonathan Kay.  N.A.F’s work aims to approach and discover the world of influence, in a live way.  Much of their work deals with sexuality and the forces that influence it.

A fool is concerned with turning believes upside down to see if they still hold together. N.A.F’s chief concern is enabling the audience to feel a sense of freedom and relief; they do this by discovering themselves, opening up where others would conceal.

The company are only funded by ticket sales and their own will to create and so have not been affected by cuts to Arts funding.

This Festival brings together 5 performances and 2 workshops which have been touring throughout the Year.  Each Fool has their own style and approach to using the structure making the Festival colourful and diverse.

During the Festival delicious food and drink will be available at 81 Renshaw St, Arts Cafe  L1 2SJ.

Joanne Tremarco plays the Fool in her acclaimed improvised one woman show in which she untwists world herstory to comical- tragical effect.

These Fools delve into the contemporary world of   man’s hidden unmanly revelations where we all meet in our vulnerability as only fools do.

“It breaks the bounds of decency to reveal the universal hidden heart.”

The Principle of Movement First.

* Opportunity for participants to perform in Imaginary Girlfriend that night.

A human sized penis and a vulva dance, argue, love and struggle in endless tragic and hilarious permutations.  Can these wars be settled by Fools?

81 Renshaw: Exhibition launch: A Window on Life by Christina Coleman

81 Renshaw Street: Devil in the Detail