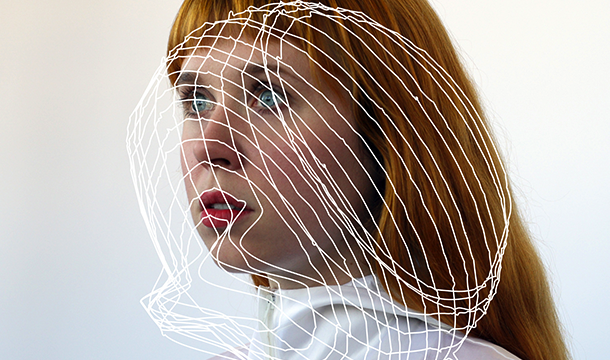 Holly Herndon and Mat Dryhurst will be using the opportunity of a residency at SYNDROME to produce a digital instrument that allows for them to accurately place objects in a 3D sound field, and have them collide and respond to each other.

The instrument will be demonstrated by Herndon and Dryhurst themselves at 24 Kitchen Street in Liverpool on Saturday 6 September.

Herndon will also be performing live as part of Syndrome on Friday 5 September, with support from Kepla and The Hive Collective

A lot of Herndon’s work to date has involved the movement of bodies in space.  Her work ‘Body/Sound‘, released on Infinite Greyscale this summer, was produced in collaboration with the dancer Cuauhtemoc Peranda at CCRMA, and she also recently premiered a collaboration with Iranian philosopher Reza Negarestani entitled ‘Crossing The Interface’ dealing with placing remote voices (of soprano Amanda DeBoer Bartlett) and sounds in a concert environment using with ambisonics.

Dryhurst’s recent work focuses on ‘responsive’ music and anticipatory computing – the idea that through data collection one can tailor live musical performances to speak directly to the individuals present.  His work at Southbank for PAN earlier this year was constructed entirely from publicly available sounds and information about event attendees who had signed up to the facebook event – the implications of the NSA and also the near future of anticipatory computing become all the more real when you are confronted with your digital shadow, or a recording of a family member, in a live musical environment.

Both concentrations deal very specifically with tailoring a live event to be responsive to physical bodies in space, and this week in the Syndrome programme will focus extending these practices into creating (and open sourcing!) a flexible tool for future experiments and performance.