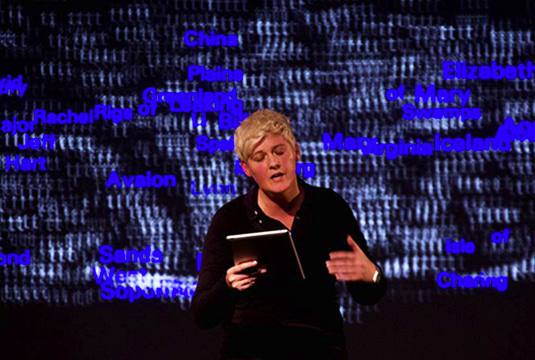 Drift takes you on a journey through time and space, where languages mix, where the ancient cohabits with the present.

Drift invents a language of connections and of extremes: from Anglo-Saxon and ancient Nordic seafaring literature to rare pop songs to human rights reports of contemporary sea migrants’ disaster. A complex and haunting meditation on sea travel, exile and history. A contemporary elegy.

Inspired by the anonymous Anglo-Saxon poem The Seafarer, Drift was originally commissioned for the festival lost.last.gru by Grü/Transtheatre, Geneva. It recently opened Shorelines Festival of the Sea, Southend-on-Sea, to great acclaim.

Thank heaven for Caroline Bergvall, an artist and poet pushing the boundaries of language in a blogged-up and twittering world.
– The Guardian

This is a truly international show and the premiere of DRIFT in the UK – make sure you can say that you were there!
– Rachel Lichtenstein, writer and curator of Shorelines