Don’t miss the last chance to see one of the most important paintings in Britain, currently on display at the Walker Art 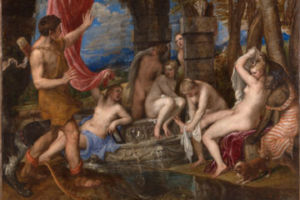 Gallery. Diana and Actaeon by Titian, considered to be among his greatest works, is on display at the Liverpool gallery until Tuesday 28 February 2012 (an extension on the original date) as part of a National Gallery UK tour.Diana and Actaeon is one of six large-scale mythological paintings inspired by the Roman poet Ovid that Titian painted for King Philip II of Spain. Titian began the picture and its companion Diana and Callisto in 1556, the year of Philip’s coronation. Spurred on by the prestige of royal patronage, he unleashed all his creativity to produce works of unprecedented beauty and inventiveness. Titian worked for three years to perfect these masterpieces, which were shipped to Spain in 1559. He claimed their lengthy genesis was due to the relentless pains he took to make sumptuous works of art worthy of the king.Reyahn King, Director of Art Galleries at National Museums Liverpool said: “I’d like to thank the National Gallery for choosing the Walker Art Gallery as the first venue for the tour. Diana and Actaeon is one of the most important paintings that Britain owns and to have it displayed at the Walker Art Gallery is fantastic and will only enrich our visitors’ experience further.” The painting depicts the fatal consequences of a mortal tragically caught up in the affairs of the gods. It is remarkable for its powerful dramatisation of extremes of human emotion, with its rich array of colours, contrasting textures and atmospheric effects.Titian ‘Diana and Actaeon’: On tour from the National Gallery continues at Norwich Castle Museum and Art Gallery, 3 March – 15 April and National Museum Cardiff, 19 April – 17 June. The painting, which is almost 500 years old, will then return to the National Gallery for the exhibition Metamorphosis: Titian 2012.Titian ‘Diana and Actaeon’: On tour from the National Gallery is a continuation of the National Gallery’s support for galleries around the UK by taking work to galleries where it has never been seen before. In 2008 / 2009, the National Gallery, London and National Gallery of Scotland successfully campaigned to acquire the painting from the Bridgewater Collection for £50m. As a result, Diana and Actaeon will remain on display in the UK.