The Royal Standard: My 5 New Friends 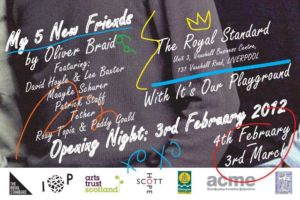 “Pretty early into the conversation he just came out with ‘maybe I don’t really love my girlfriend’…He was asking something
about my parents and we were talking about my Dad and his penchant for buying wives. He instantly made the comparison
between me and my Dad, like these boys being objects in a frame. I think those were his actual words…My therapist says I
have no real idea how to relate to men. My mum says all men are bastards and I’m probably autistic. My dad says I should
meet his new girlfriend, Danni, she’s 19 and looks cracking in a pair of hot pants.”

Text from the artist’s documentation. (Available at www.myfivenewfriends.com)

Last year artist Oliver Braid embarked on a mission to develop relationships with the five most attractive young male
undergraduates from Glasgow School of Art. The documentation and interpretation of these encounters will form the basis
for ‘My Five New Friends’.

French artist/curatorial team It’s Our Playground have been working alongside Braid on this journey to build an online
database housing the archive of his relationship documentation. Following the opening of his exhibition at The Royal
Standard this database will become publically accessible at www.myfivenewfriends.com, enabling the viewer to gain a
personal and excruciating insight into Braid’s project.

The developing narratives documented during this process have been further interpreted by five selected film artists
given private access to the evolving online database for five months leading up to the exhibition. With each artist focused
towards one of the five friendships their engagement acted as an online residency. The culmination of this will be newly
commissioned short films cum-psychological assessments made in response to these monitored relationships. The
commissioned residency artists are David Hoyle & Lee Baxter, Patrick Staff, Maayke Schurer, Roxy Topia & Paddy Gould
and Tether.

The exhibition at The Royal Standard will juxtapose the newly commissioned short films alongside meticulously hand
crafted ‘gift objects’ created by Oliver Braid, one for each of his new ‘friends’, all re-presented in a bespoke installation
environment designed by It’s Our Playground.

Reeking of Lynx, take-away food and desperation, ‘My Five New Friends’ is one part teenager’s bedroom and one part
labyrinthine fantasy film. Exploring the impact of art-making on human interactions through a lens of DIY psychotherapy it
opens a portal into a domain fuelled by heavy drinking and a search for happiness.

The Royal Standard: Grand Opening Event for The Agency as part...