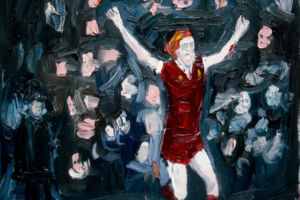 The Royal Standard is to present the first Liverpool solo show of painter and songwriter Mikey Georgeson (b.1967). Bringing together a varied body of work from Georgeson’s extensive career, the exhibition aims to explore and resolve the tension between art and life.

In response to this, Georgeson identifies the ‘Trope’ (a motif or device that while suggestive, does not carry the stigma of a cliché) as the crack that opens between the audience (life) and the artist (art). Eleven paintings in the show focus on Georgeson’s ongoing love of Liverpool Football Club as a trope through which he can explore ‘sending an emissary from his adult rational self to mix with the transcendental awe of his childhood’. He taps into memories of his boyhood bedroom in which his father had created a large scale recreation of the Kop, pasted together with faces cut from the Observer Magazine.

Alongside his work as a visual artist, Georgeson is also an accomplished musician. As ‘the vessel’ he is singer and songwriter in the cult rock art-band, David Devant and His Spirit Wife. In 2005, he began his solo career using the stage name Mr Solo and will be performing at The Royal Standard private view on the evening of Thursday 7 June.

The Royal Standard: White Teeth in the Planetarium by James McLardy