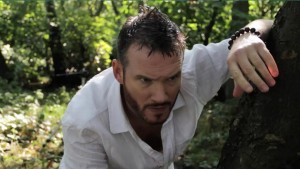 Following The Wicca Man is the first motion picture produced by Jacqueline Kirkham Studios. It is an original British horror film that mixes historical accuracy with cinematic storytelling.

Following The Wicca Man takes us on a harrowing journey into the dark and secret world of witchcraft as we follow Clayton Stone, played by Gaz Elliot. Clayton is a successful film-maker whose new project wants to portray witches less as the fairy-tale bad guys and in a much more realistic light. He soon discovers he lives close to the home of legendary witch, Gerald Gardner and believes that his coven have gone underground – but not very far. His attempts to infiltrate lead to disastrous consequences.

Along the way Clayton is guided by a White Witch played by the film’s director, Jacqueline Kirkham, who also wrote the script. The entire cast are up and coming actors and the film was made on a micro budget of less than £10,000. Shot primarily in the director’s home town of Crosby, Liverpool showcasing what would have been Gerald Gardner’s stomping and the amazing sunsets of Crosby beach where Anthony Gormley’s Iron Men are stood.

The film is to be premiered at the Plaza in Crosby, before the studio embark on their next project, another horror film entitled  The Haunting Of Ivy Cottage which is based on some real ghostly experiences at the director’s home.