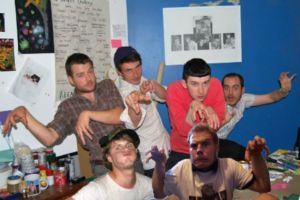 Most of the events are especially commissioned for this series, providing a special emphasis for exhibitions or a one off event.

What is the role of an arts institution in facilitating community connections and generating frameworks for public meaning making through art and media? FACT hosts the seminar, Cracking the Curatorial to launch Open CuRate It (http://www.opencurateit.org), a three month programme of events and an online participation space designed to experiment with new models of curation and institutional engagement though emerging forms of media.

Curator Tour of Charline von Heyl: Now or Else

Join Gavin Delahunty, Head of Exhibitions at Tate Liverpool for a free tour of Charline von Heyl: Now or Else.

Distinctive, imaginative and always surprising, Charline von Heyl’s work offers a fresh and exciting approach to the world of abstract art. Von Heyl is at the forefront of a new generation of abstract painters who have rejected late modernism’s emphasis on a singular signature style.  Charline von Heyl at Tate Liverpool will be the first major exhibition of the artist’s work in the UK. Featuring forty two of her large canvasses and a number of unique works on paper.

A Collaborative Installation by Arena artists, Niamh Crimson and Carol Ramsay with sound by Iain Yell.

Digital technology has replaced the cassette tape but can we ever forget the pleasure taken in ‘taping’ the Top 40 from the Radio on a Sunday night or making a mix tape of favourite songs for the one you loved. This installation is a celebration and a reinvention of the Joy of Tape.

As part of this opportunity across the city to find out about contemporary artists’ practice, some of the Bluecoat’s creative community artists open their studios to the public.

2-3pm at The Royal Standard

Last year artist Oliver Braid embarked on a mission to develop relationships with the five most attractive young male undergraduates from Glasgow School of Art, in the hope of better understanding his interactions with other men. The documentation and interpretation of these encounters form the basis for his new work ‘My Five New Friends’. Saturday 3 March will be the final day ‘My Five New Friends’ can be seen at The Royal Standard. To mark this occasion Braid will give a Talk about the exhibition in collaboration with Stephen O’Toole, one of the writers who guest edited the online version of My Five New Friends and an Art-psychotherapist. Free, just turn up.

4-6pm at the Bluecoat

Wolstenholme Creative Space opens its doors for one last chance to see current exhibition ‘Fixation’, curated by Joe McNulty. Focusing on the nature of obsession, Fixation presents work from a variety of sources in an exhibition that is diverse but cohesive in theme and media; producing a focal point for dialogue and reflection. Come and join us for an evening of drinks and interesting sound performances!

‘Do As I Say…’ at Cornerstone