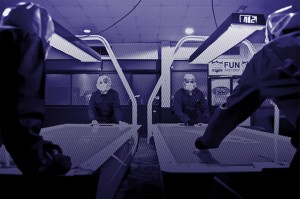 The Kazimier and The Kazimier Garden are welcoming the biggest amount of Barcelona acts ever to have played Liverpool on the same date! All-time favourite garage-rockers Mujeres and futurist, powerful post-rock duo The Suicide of Western Culture will be presenting their third album, joined by the fuzzy, reverby guitar pop of Univers and Primavera Sound’s Dj Coco, with his fantastic set closing the festival again this year. Exceptional singer-songwriter Pau Vallvé is also to perform at LIV-BCN, while Liverpool additions to the bill are to be expected. So far confirmed are the cult Liverpool four-piece Clinic -15 years after the release of their superb, acclaimed debut album ‘Internal Wrangler’-, MinionTV playing Liverpool for the first time in over two years and the sensational Strange Collective.

See the full line up and book tickets at liv-bcn.com/liverpool-music