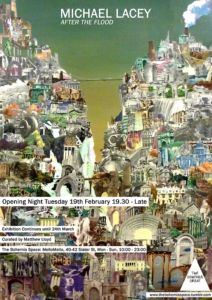 life, and the relationship between fiction and its creators. I use

various 2D media to present scenes in which recurrent characters and

symbols allude to an over-arching mythology and themes of mortality

and isolation. These scenes are often fantastical or absurd, but always

While dense with personal significance, the work in AFTER THE FLOOD is

intended to create a contemplative space for the viewer, often guided

by bleak humour, cultural references and visual cues. The mixed-media

canvasses depict a bleak, purgatorial coastal landscape and the

travels and rituals of its inhabitants. Combining drawn/painted

elements with various collaged materials suggests a blurring between

the real and the fictive, the mingling of individual and shared

experience, as archival imagery of well-known architecture is

reconstituted into strange yet familiar forms. Amidst these

Michael Lacey is an artist and writer based in Liverpool. He studied

Painting and Printmaking at the Glasgow School of Art, graduating in

2009 and receiving the Walter Hutcheson Prize for drawing. He has

since exhibited widely around the UK. Recent projects have included a