The Bluecoat: The Proof Principle 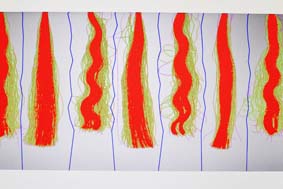 The Bluecoat to stage first public viewing of ‘The Proof Principle’, a photography project celebrating Unilever’s century of research at Port Sunlight.

In 2011 Unilever celebrated one hundred years of research and development at Port Sunlight, Wirral. To help celebrate this anniversary, the R&D laboratory commissioned photographer Colin McPherson to undertake a commemorative project to mark the year. The result was ‘The Proof Principle’, a multi-layered exhibition which combines photography, installation and a film of ‘moving stills’. The photography was inspired by conversations McPherson had with staff at the R&D facility and is a response to the work of the scientists, researchers, psychologists, mathematicians and technicians at Port Sunlight.

‘The Proof Principle’ was unveiled to staff at Unilever’s Port Sunlight R&D laboratory in December 2011 and will be shown in public for the first time at the Bluecoat, Liverpool’s creative hub from 20th February until 11th March, 2012. It is the culmination of a year’s work on a commission which was originated by Unilever Port Sunlight Research & Development in conjunction with Arts & Business.

Colin McPherson said: “As an artist using photography, my work is shaped by three principles: interpreting what I discover, making a permanent record of the discovery and telling a story using the photographic image.

I was delighted to have been approached by Arts & Business to undertake this commission to commemorate what is not only a significant milestone for Unilever and its staff but also for the local community and Merseyside.”

Further information about the project can be found at www.colinmcpherson.co.uk

Colin McPherson was born in Edinburgh and began working professionally as a photographer in the late-1980s. His work specialises in documenting human intervention in social and natural environments as well as reportage on important ongoing political themes. His work is published internationally and he regularly shows his project work in both solo and group exhibitions. He lives with his family in Hoylake, Wirral, a few miles from the Port Sunlight facility.

the Bluecoat: The Ugly Girl

The Bluecoat: Nick Williams: Be Inspired and Inspiring

Bluecoat: Left Hand to Back of Head, Object Held Against Right...