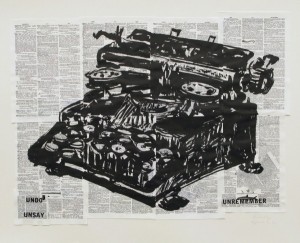 One of South Africa’s greatest contemporary artists, William Kentridge is acclaimed worldwide for his films, drawings, theatre and opera productions. He is also an innovative and prolific printmaker whose career began studying etching at the Johannesburg Art Foundation.

Over the past 25 years Kentridge has produced more than 300 etchings, engravings, aquatints, silkscreens, linocuts and lithographs, experimenting with formats and combining techniques. Often the social and political themes explored in his prints end up being featured in a piece of theatre or animated film. This exhibition includes over 100 prints in all media from 1988 to the present, with a focus on experimental and serial works, ranging in scale from intimate etchings to linocuts measuring 2.5 metres high.

A centrepiece is Portage (2000), a four metres long accordion-folded multi-panelled book with torn paper silhouetted figures collaged onto unbound encyclopaedia pages. Flowing from left to right, some dancing, some bearing possessions on their backs, these figures are evocative of displaced migrant workers in apartheid-era South Africa and the plight of refugees worldwide. They also capture the exuberant atmosphere of carnival. The procession is one of Kentridge’s great themes, ultimately a symbol of humanity’s journey through life.

the Bluecoat – Biennial ‘Made Up’

the Bluecoat – The Print Studio

The Bluecoat: The Void

The Bluecoat: Nick Williams: Be Inspired and Inspiring