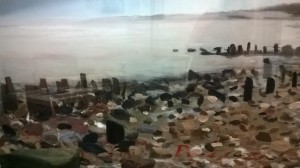 23 August 2014
8-11.30pm
Entry fee is £5.  Buy your ticket in advance with Eventbrite
This August visual artist Josie Jenkins amongst will be collaborating with Sevenstreets (www.sevenstreets.com) and musicians from Liverpool and beyond for a commission as part of Liverpool International Music Festival 2014.
A century ago, Europe, and the World, erupted into brutal conflict. The spark? The pull of home and heart, and the ties that bind us, all, to our territory. Our place under the firmament. By the end of the war, 90 million souls were lost. Four major empires wiped from the map, and a score of independent nations created. A landscape scarred by trench, crater and rubble.
You Are Here will bring musicians from the triple entente together – The United Kingdom, France and Russia – to investigate their experiences of what home means to them.  Now; in the 21st century. What is this thing called home?  Does it still tug at our sense of identity? Does the ground beneath our feet indelibly shape our creative process? Or are our borders drawn around something something deeper than battle lines and political allegiances?
The collaboration will explore what we mean by home, in a world better connected than ever before. In a world where trenches are filled with fibre optic cables, yet, stubbornly, the battles remain. Just what are we fighting for?
The Artists
Bill Ryder Jones: Musician and film score composer, Wirral’s Bill Ryder Jones’ warm, bruised and beautiful compositions show this ex-Coral guitarist as a major new force in songwriting, as his cinematic and critically acclaimed ‘A Bad Wind Blows In My Heart’ album elegantly shows.
Bill will be working with John Hering (Ex Easter Island Head/ a.P.A.t.T ) whose work straddles the fraught no-man’s land between electronica, contemporary classical and experimental – with compositions and performances that are as haunting as they are genre defying. John will be string arranging/orchestrating the event.
Moongai: Hailing from Nantes, Moongai fuse sensitive Gallic pop with brutal electronic textures. Orchestral, tribal and playful, their live shows are never less than incendiary. Core duo Eva Ménard and Grégoire Vaillant are the true giants of Nantes.
Noonwraith: Moscow’s Noonwraith – recently showcased on BBC Introducing – working in collaboration with ARCHNGL – blends haunting vocal samples with beats that are breathtaking and menacing in equal measure.
KOF:  Soulful storyteller, KOF is hard to pin down. Weaving his soul-laden voice over gorgeous melodies and innovative textures, this 1Xtra favourite could, very possibly, be sent here to save R’n’B as we know it.
Josie Jenkins: Liverpool-based artist Josie Jenkins documents the frayed ends of our shrinking cities, and capture a hinterland of strange beauty. Her canvases document wastelands and brownfield sites – anywhere zones of quiet chaos. She’s the latest winner of the New Lights Arts Prize.
Cinematography by Christopher Marsh, whose Retronica Video Corps is collating the Conet Project: a visual document of the encoded and covert world of shortwave number stations, to be exhibited exclusively at the event.
Sefton Park Palm House, Liverpool