“Westwood” at The Atkinson in Southport was two years in the planning and it was a bold and inspirational move by the exhibition’s curator Joanne Chamberlain, as this showing of such a world renowned fashion designer breaks new ground for the gallery.  Spread over three designated areas, the exhibition includes dresses, suits, t-shirts, corsets, shoes, jewellery and accessories by Vivienne Westwood (b.1941).

When you enter the space through the butterfly covered double doors of the Art Box, you immediately become the audience in a fashion show as you come face-to-face with a catwalk of Westwood’s designs.  The outfits ‘strutting their stuff’ provide a glimpse into the breadth of her talent as a designer, her love of history and her desire to inspire confidence in all of us to embrace our individuality.

This is perhaps best encapsulated in one of the pieces, a man’s jumper, which features a technically accomplished dropped armhole completed with a second fabric, a feature reminiscent of the slash-cuts of the 17th century, as if showing the shirt underneath.  The sleeves are also covered in a bold geometric African-style pattern that was the hallmark print of her first catwalk collection ‘Pirate’ (Autumn/Winter 1981).  Subtly underlying this is a facsimile of Westwood’s Squiggle wallpaper, which provides a stunning backdrop, highlighting Westwood’s diversity as a designer to explore avenues beyond fashion. 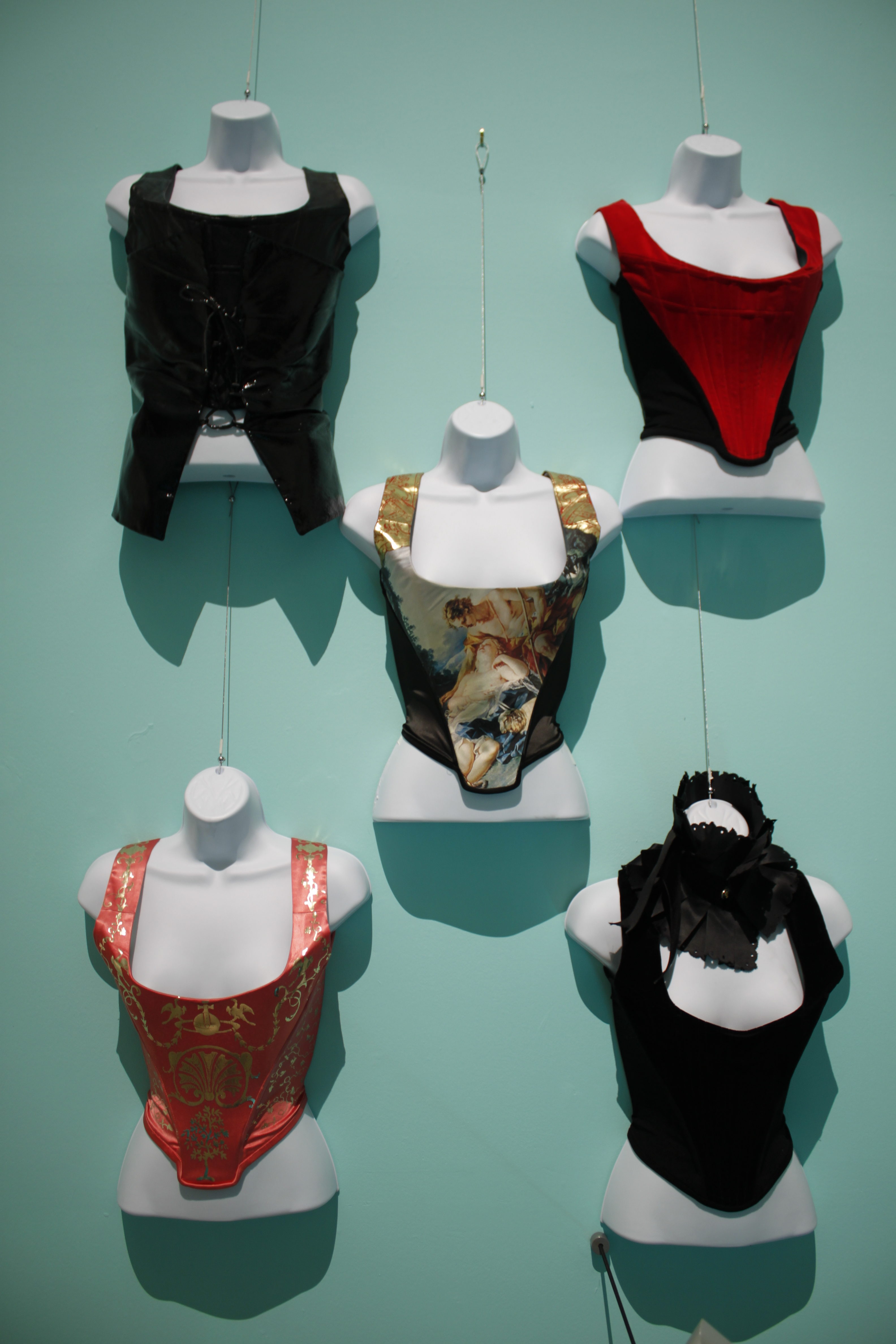 Westwood has been described as an unashamed plunderer of the past, a fact hard to deny and instead this exhibition unashamedly embraces Westwood’s influences.  For example, a large facsimile of Daphnis and Chloe by François Boucher (1703-1770) dominates one of the spaces.  This is assertively juxtapositioned behind a row of Westwood’s pieces such as the ‘Kiss Jacket’ (1992/1993), which features a section of Hercules and Omphale (1730-1739) by Boucher.

As you walk through the spaces you realise that Westwood’s work went beyond the clothing racks in fashionable boutiques and into the realms of social history.  Perhaps the most poignant garment in the exhibition that exemplifies this is Westwood’s ‘Cowboy’ t-shirt depicting two nude cowboys.  The graphic was originally published in the French magazine ‘Manpower!’ in 1974, drawn by the artist Jim French (1932-2017).  Alan Jones, a shop worker, was the first person to wear the t-shirt in public and was promptly arrested on the King’s Road, London, charged with “showing an obscene print in a public place” under the Vagrancy Act of 1824, for which he received a fine.  Similarly, when you look at the shoes you cannot help but be reminded of Naomi Campbell’s famous fall at Westwood’s 1993 show in Paris which hit the headlines across the world.

Another interesting dimension to this exhibition is the intimacy of Westwood’s relationship with the visitor.  This is created through the various direct quotes on the Tiffany blue walls, which is a replica of the colour used in Westwood’s first boutique in London.  The quotes provide an insight into Westwood’s philosophy on life and as you read her words you cannot help but form an immediate relationship with the designer, albeit in essence.  This relationship touches upon a refined quality that underlines this exhibition, that is the reverence people have for Westwood.  The items on display have not been tucked away in museum drawers but bought, cherished and kindly loaned by an ardent collector, Malcolm Garrett, whose passion for her work has lasted decades.

An endearing photograph of Westwood testifies that she is now a Dame of 78 and it is questionable whether at this age the plunderer has become the prey for a new generation of designers, such as Jenny Sun.  However, Westwood’s influence on others is not touched upon in this exhibition, neither does it follow one statement collection, or one time period of her work, or compare and contrast her to her contemporaries.  Is this a failing?  Well, the clue to this exhibition is in the title: ‘Westwood’ – pure and unconfined.  The over-riding perception one can take from this exhibition is that Westwood is multi-talented and fundamentally a woman with a love for humanity: “You’ve got to start to love the world and know about the whole genius of the human race.  We’re amazing people.”   Perhaps herein lies the secret of her enduring appeal.