For over sixty years, the biannual John Moores Prize has positioned Liverpool as a significant sponsor of cutting edge contemporary painting. In the words of its founder the stated mission of the prize from its inception has been “To give Merseyside the chance to see an exhibition of painting and sculpture embracing the best and most vital work being done today”. The exhibition The View from the Top of a Pyramid currently on show at the Walker Art Gallery is the latest product of Liverpool’s painting patronage and draws its inspiration from the history of the city’s visual culture.

Contemporary artist Jacqui Hallum is famed for her ethereal, eclectically inspired textile paintings with motifs derived from everything from ancient woodcuts to Berber carpets. As winner of the John Moores Prize in 2018, part of Hallum’s reward was a three month Fellowship at Liverpool School of Art and Design and this solo show. The free to enter exhibition on the gallery’s first floor consists of just over one room’s worth of her signature decorated fabric hangings, largely derived, conceived created and during her time in Liverpool. 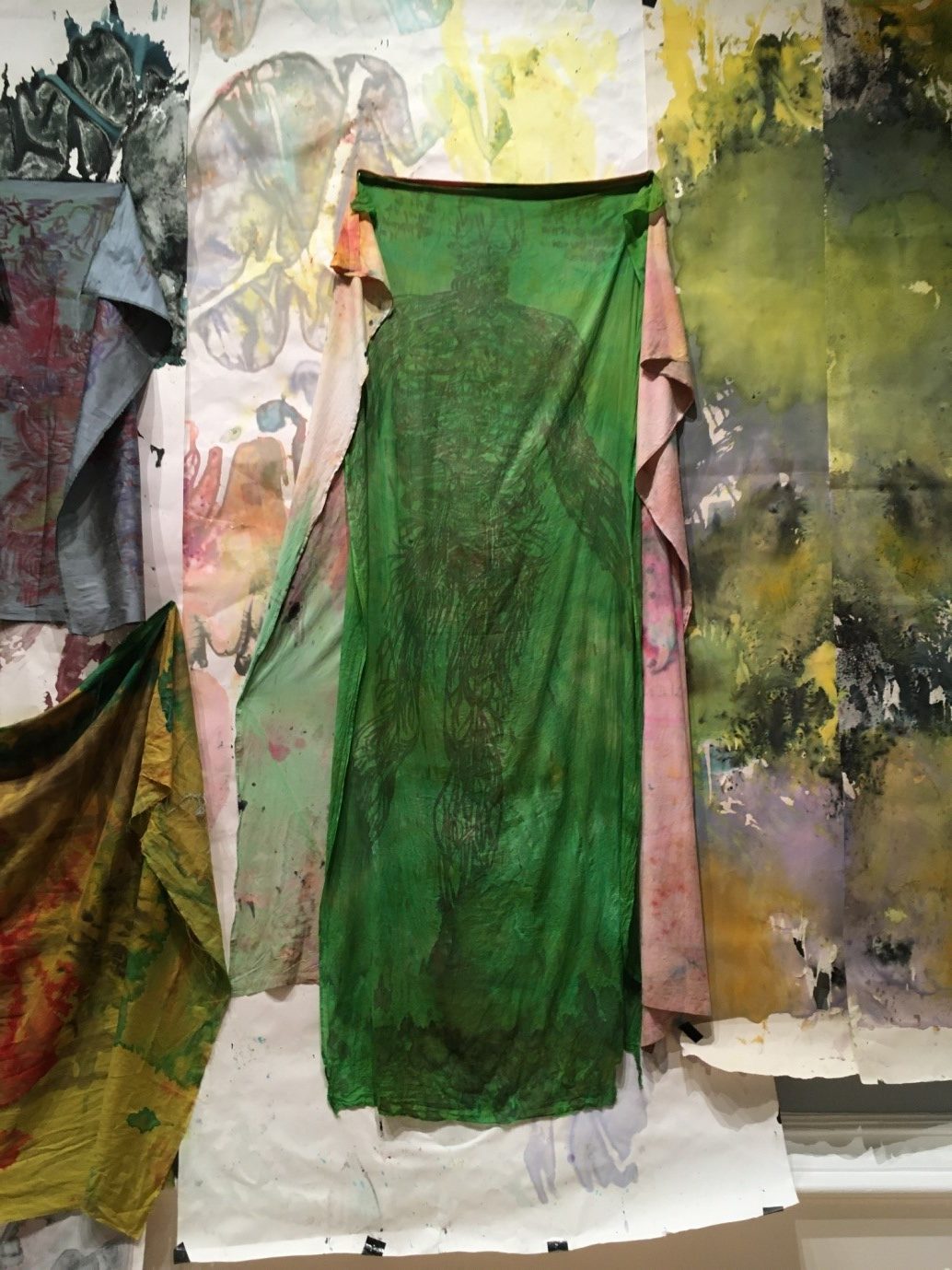 As a prelude to the new works the introduction to the exhibition is accompanied by Hallum’s award winning ‘King and Queen of Wands’ acting as a segue from adjacent John Moores Prize Winners exhibition. Its three large scale draped cotton panels are displayed side by side in a style reminiscent of a Renaissance triptych. The overlapped slumping sheets are steeped in washed out greys and reds, with flashes of yellow offering some respite from the prevailing sense of foreboding. The tarot inspired images of the titular king and queen are primitively scrawled on the flanking sections, a chilling echo from some bygone malevolent mythology.

Speaking after the award of the 2018 prize, Walker curator Jenni Lomax commented:
“There is something about the provisional and nomadic nature of the work that makes it feel very current”. “At the same time an initial sense of lightness belies historical and personal references that collapse within its folds.”

Born in London in 1977 and having studied at Coventry School of Art and Design and the Slade, Hallum now lives and works in Totnes, Devon where she often paints in the open air. Her work pushes the boundaries of painting and the painted object and blurs the line between the two. She embraces chance techniques, corrosion and amorphous site specific display to constantly challenge the conventions of the medium.

During her time in Liverpool Hallum immersed herself in the region’s visual identity, especially the collections of many of its artistic institutions. She drew on sources in the Art Schools library, the Anglican Cathedral’s archives and Walker’s own collection amongst others, focusing on lost fragments and worn parts to form what she refers to as a “rich soup” of inspiration – evidenced in the artist’s notebooks which are included in the show. Using a temporary studio in Liverpool, these sources were channelled into the works on show.

The Liverpool works are given their own dedicated room for the show, their chaotic nature at times feeling at odds with the starkly spot lit, polished surroundings. The exhibition consists of a selection of Hallam’s signature decaying fabric paintings primitively secured directly onto the gallery walls. The Walker team have valiantly attempted to label individual pieces amongst the melee of overlaid works, some untitled and others with names as eclectic as “The Real Romford Pele”. In truth the discreet works collapse into an amorphous compression of endless layers of visual history that insight thoughts of mortality and the brevity of any civilisation in the context of the universal timescale. 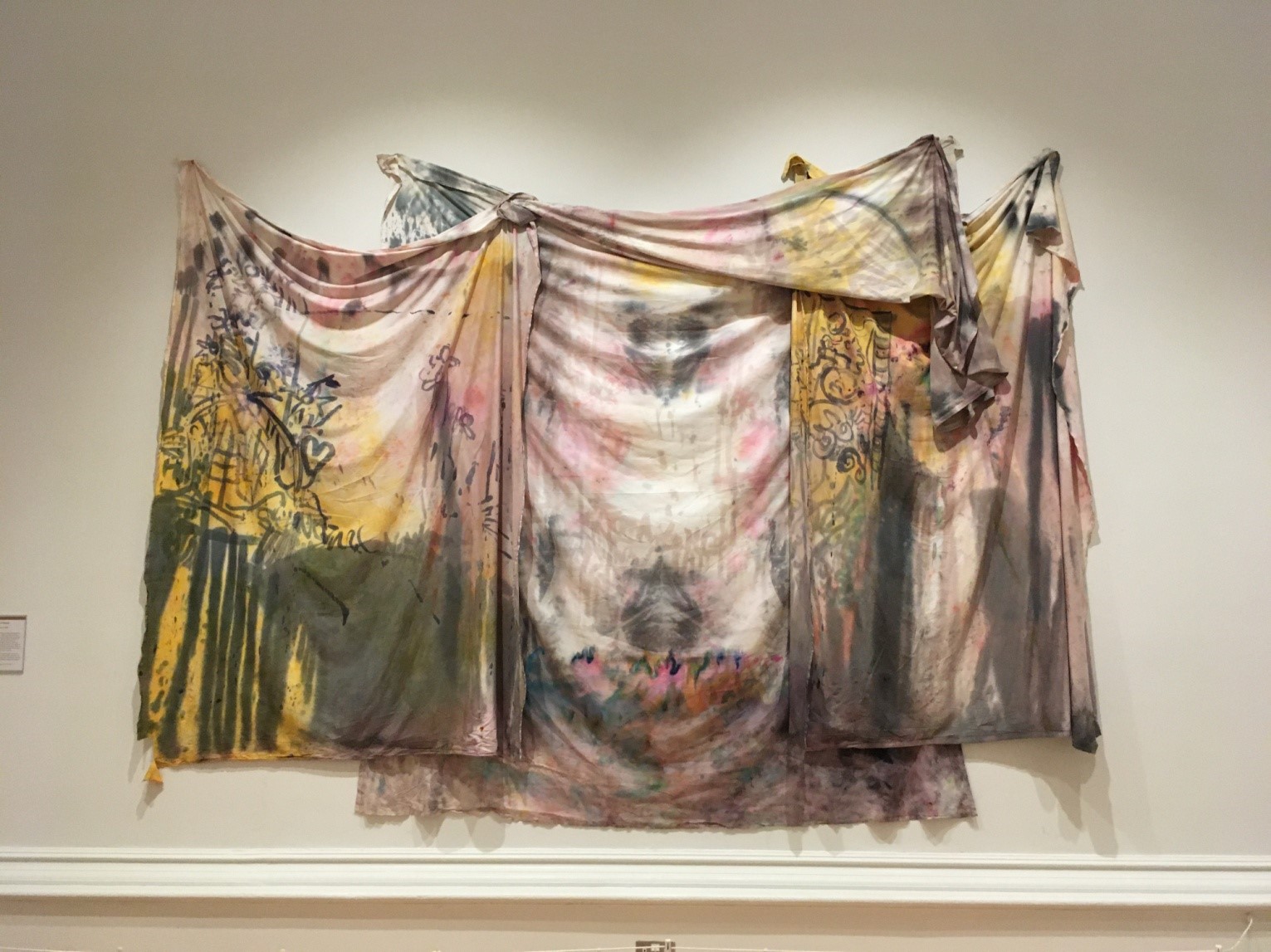 One individual work that can be picked out is “How Do You Know It? Because You Show It” (2018), a combination of two overlaid painted cotton panels which emerge from the untitled paper works mounted beneath them. The underlying panel features washed out psychedelic pinks and green with interspersed with occasional jarring spots of deep grey; atop this sits a contrasting marbled green panel and these chaotic layers of decaying fabric act as the eternal resting place for a ghostly human figure, with its arms held out in a signal of surrender as it submits to the ravages of time.

In terms of bringing edgy painting practice to Merseyside, this project certainly delivers on the mission of John Moores and his prize. If you’re interested in experiencing the motifs of Merseyside seen through the lens of their transition over time, then this enthralling exhibition will be for you. Hallum’s works stretch the boundaries of what paintings can be and how they can be made and in their origin and aesthetic they epitomise Liverpool’s vital artistic spirit.