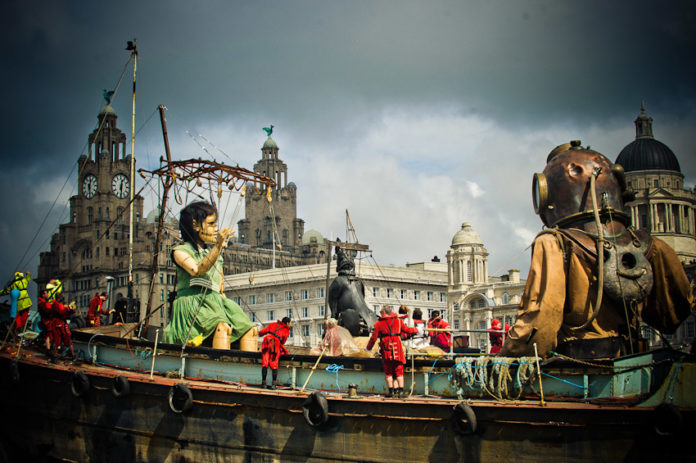 Your GIANT guide to the biggest event of the year!

THE COUNTDOWN is on with just days to go until three Giants roam the streets of Liverpool and Wirral.

Here is everything you need to know about Liverpool’s Dream.

Liverpool’s Dream takes place from Thursday 4 to Sunday 7 October 2018. Although expect to see some evidence of the Giants earlier on in the week…

Which Giants are back?

In a UK premiere Liverpool will welcome the Little Boy Giant, he will be joined by The Giant and playful canine Xolo (pronounced cho-low).

Can I see them all at the same time?

For majority of the time, the Little Boy Giant and Xolo travel together and the Giant will travel on his own. However the Giants are set to be reunited on Saturday afternoon, and will be walking together on The Strand on Sunday.

Where are they going?

The first sighting of the Little Boy Giant will be when he’s asleep in St George’s Hall on Thursday from 3pm to 11pm.  On Friday, the Giants will explore both Wirral and Liverpool, and on Saturday and Sunday the event is concentrated around Liverpool city centre. The Giants will cover around 21 miles in total. Download the routes from www.giantspectacular.com/routes or pick up a map with all the information from the Tourist Information Centres based in either Central Library or the British Music Experience in Cunard Building. 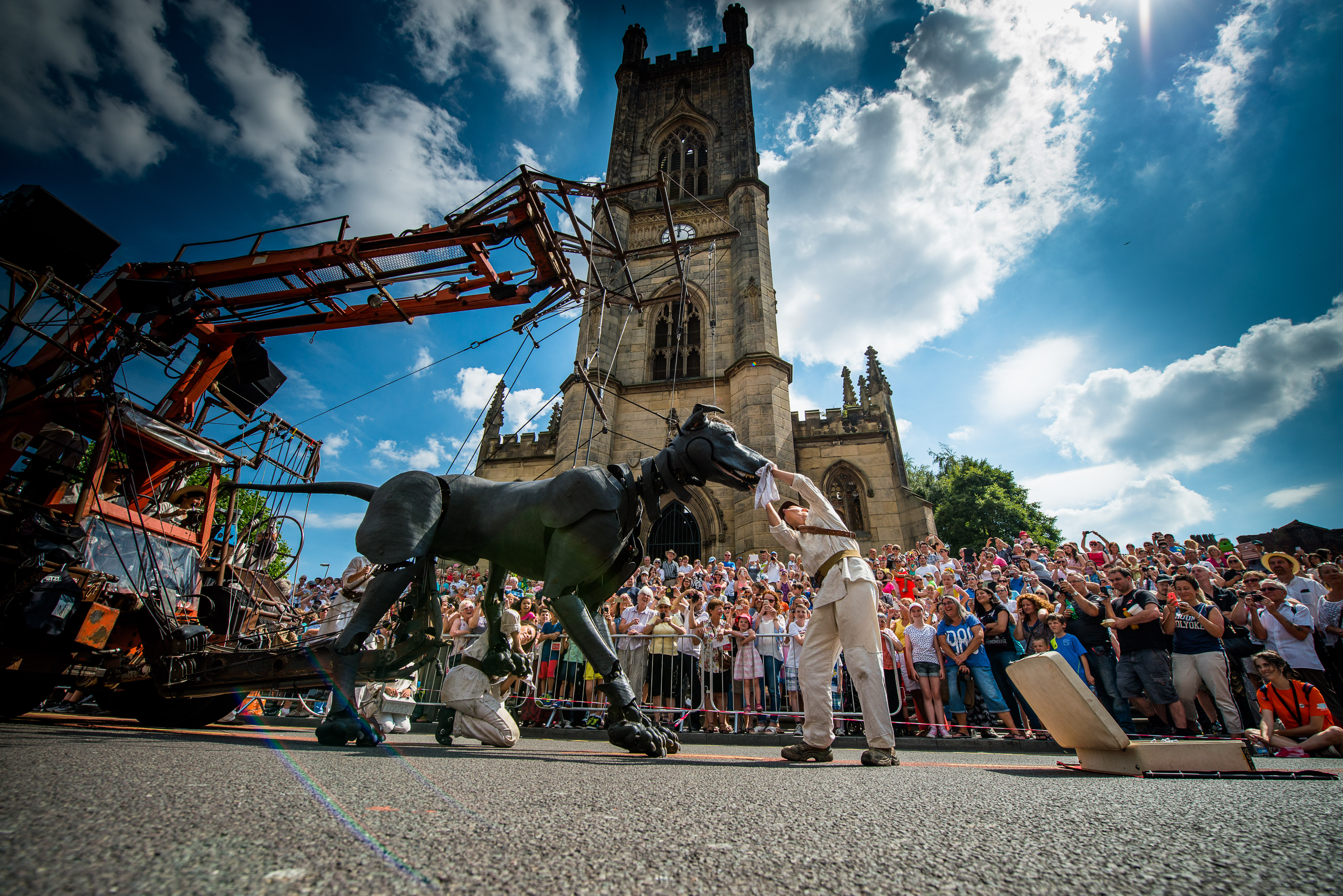 Will there be any surprises from Royal de Luxe which aren’t on the map?

Always! The French geniuses love the element of surprise and as it’s the last ever time the Giants will perform, our advice is to expect the unexpected until the very final moments.

Do I need tickets to get into St George’s Hall?

No – the ethos of Royal de Luxe is that their shows are free for people to enjoy. However, the Giants are incredibly popular so be prepared for large queues. Plans are in place to entertain the crowds from 7pm with live music. Please be aware that the event finishes at 11pm so people need to plan carefully how they are getting home if they are using public transport.

All bags are subject to being searched on entry and large bags will not be allowed inside the main Hall itself. No food and drink can be consumed in the room where the Giant is sleeping.

What is the football event at Princes Park?

On Thursday from 9.30am until 5.15pm, Liverpool FC, Everton Football Club and Tranmere Rovers are staging a series of free, football coaching sessions for hundreds of local school children – with a Giant sandal as a goalpost! All sessions have been filled – but people are encouraged to head to Princes Park and watch some football with a difference.

If times change when the Giants are walking, how will I know where they are?

This year there is live tracking of the Giants’ movements. Just head to www.giantspectacular.com/routes and the interactive Google map will show viewers exactly where the Giants are.

What are the road closures?

With an event of this scale there will be disruption from Friday to Sunday and access to certain areas will be restricted. A comprehensive list of all the roads affected can be found at www.giantspectacular.com/routes

How should I get there?

The key is to plan your journey in advance, leave more time for your journeys and look at all options in order to make sure you don’t miss any elements you wish to see. There will be significant road closures so anyone driving in needs to ensure they are heading to an unaffected area, particularly if a car park falls within the event zone.

Public transport is recommended. There will be some changes to services and they will be very busy so check timetables in advance and don’t leave it until the last minute.  A summary of information for travelling by train, bus, Mersey Ferry or via the Mersey Tunnels is available at www.merseytravel.gov.uk and go direct to transport operators for the most up to date information both before and on your day of travel.

There will be changes to Merseyrail services on Friday 5, Saturday 6 and Sunday 7 October and a special events timetable will run. The following applies to all three days:

Please check in advance if the station you are planning to use has been affected by the change.

Passengers can find out more information by visiting www.merseyrail.org/giants or picking up a leaflet from any staffed station.

Mersey Ferries will be running as usual on Thursday and Friday and shuttle services between the Pier Head, Seacombe and Woodside will replace the River Cruise Explorer services on Saturday and Sunday.

Due to the nature of the Giants, they can be seen from many different viewing points. We would suggest for those who are looking for less crowds, view the Giants parading from the further out of the city centre.

There are a number of accessible areas on the Friday and Saturday. Space will be allocated on a first-come first-served basis. 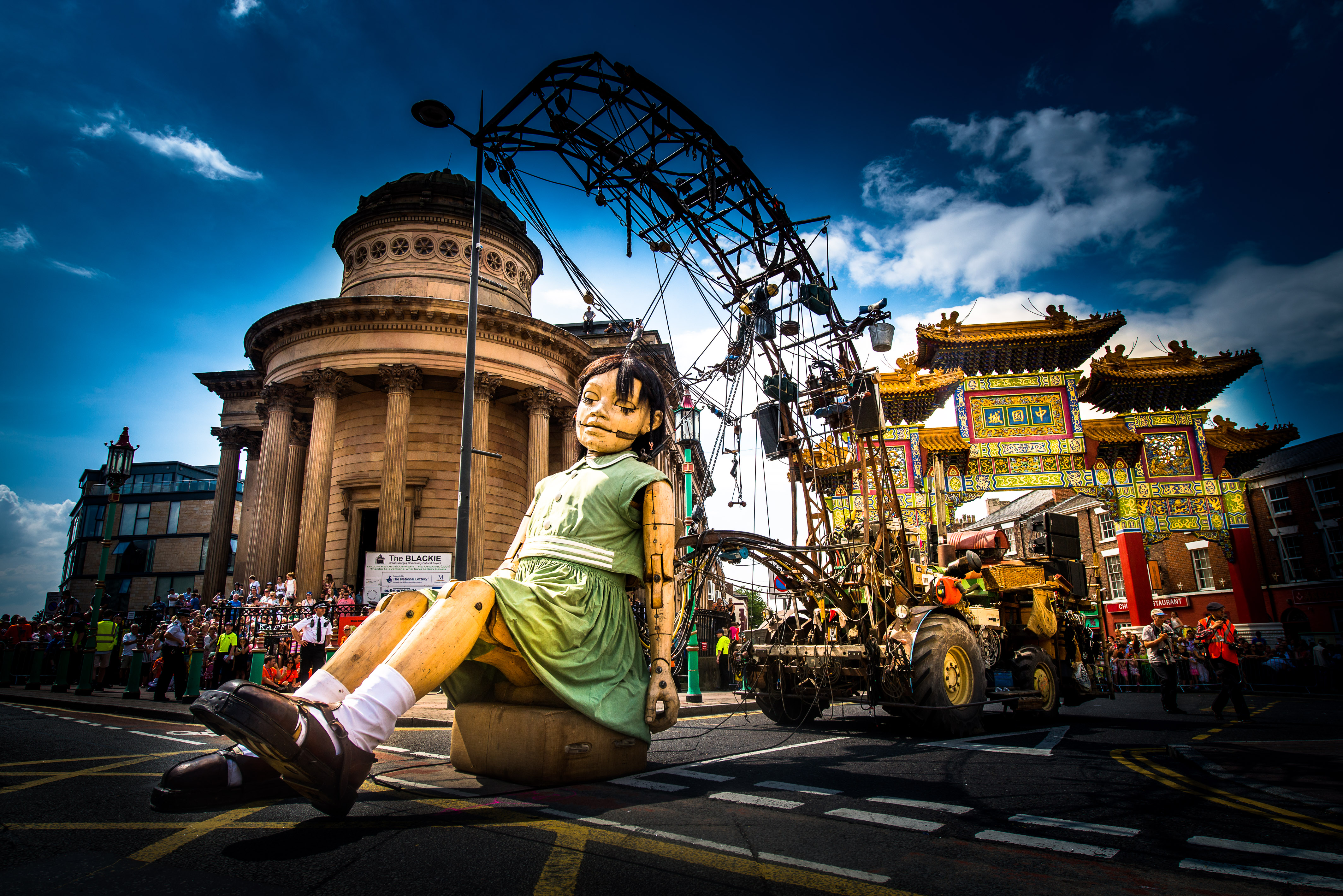 All Accessible Viewing Areas will be identifiable at the event by a blue flag and white wheelchair symbol.

At Wirral there will be limited parking for blue badge holders available along Kings Parade in New Brighton. Those with a blue badge are advised to head to Kings Parade via Harrison Drive and Bayswater Road, following signs for event parking and they will be directed to mobility parking. This will be filled on a first-come first-served basis and once this area is full, blue badge holders will be directed to park on the Dips.

Are there any toilets along the route?

There will be a number of toilets in locations where the morning wake up scenes, siestas and good night shows all take place.

Will there be food and drink concessions?

There will be a small number of food and drink concessions in locations where the morning wake up scenes, siestas and good night shows all take place. Food on offer includes fish and chips, curries, Caribbean dishes, noodles, burgers, bao boxes, crepes, cakes and ice creams, as well as a selection of hot drinks.

Will there be Merchandise available?

Yes. Giants merchandise is always sought-after. This year limited edition souvenirs include re-useable bags, water bottles, t-shirts and beautiful prints which can be bought online via the Giant Spectacular Facebook page and the Giant Spectacular website, or at any of the official merchandise concessions at the event. A beautiful souvenir programme will also be available to purchase from programme sellers on site.

Will there be a book as in previous years?

Plans are in place to produce a book which will feature the story of Royal de Luxe in our city, along with some beautiful images from the 2018 spectacular. As in the previous two instalments years we will be featuring photos from members of the public.

Can drones be used?

Is it really the last time the Giants will perform anywhere in the world?

Founder and Artistic Director of Royal de Luxe, Jean-Luc Courcoult has confirmed this is the last time this family of Giants will ever be seen. This is not the end for the world-renowned street theatre company, and they will embark on a new chapter with brand new creations.

Who is paying for the event?

The Liverpool City Region Combined Authority is supporting the event as part of the Single Investment Fund. Arts Council England funding and sponsorship from other private and public sector bodies are all making Liverpool’s Dream possible.

What economic impact does it have on the city?

Where can I find out more?

Northern artists to be commissioned for the New Creatives project

Review of Digital Show in Metro