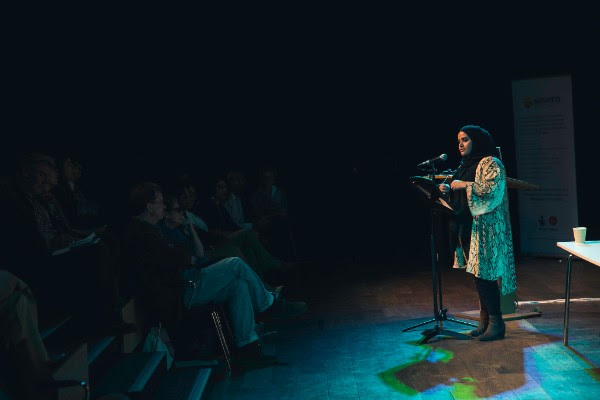 Young LAAF is a special project, funded by Amal – A Said Foundation Project to promote the voice of young people of Arab culture or Muslim faith.

For the first time, a group of young people aged 14 – 25 have come together to research, plan, programme and deliver special pop up events as part of Liverpool Arab Arts Festival 2017 (8 – 16 July).

There will be a performance by Amina Atiq, a Yemeni published poet and member of Writing on the Wall’s young writers group who uses her words to educate.

All welcome. Suitable for all the family.

This event aims to increase the awareness and understanding of Ramadan by using Arab arts to explore the rituals and traditions.

For this event, the Young LAAF group have commissioned master calligrapher Moustafa Hassan, and the Liverpool Lantern Company who create amazing light creations big and small to work with 60 pupils.

An award-winning photographer Leila Romaya, has been working with a group of young people to create an exhibition that will be premiered at this event.

There will be cultural refreshments chosen by our young people: dates, samosas, and vimto!

See the life of young people of muslim faith from Liverpool during Ramadan and Eid.

Through the camera lens, gain an insight into the important rituals to their time during their holy month of Ramadan and festival Eid al-Fitr.

A great way to end the first year of Young LAAF, whilst having a full fun packed day at the Palm House for all the family.

This year LAAF explores the theme of ‘The space between us’, responding to Liverpool’s city-wide 67-17: 50 Summers of Love season, celebrating the release of the Beatles’ Sgt Pepper’s album. The title is taken from a lyric from Within You Without You a track on side 2 of the album written by George Harrison, which tells of overcoming the forces that prevent us from recognising what unites the world.

Prams and Pushchairs Welcome at The Walker

Studio spaces for hire at RedWire