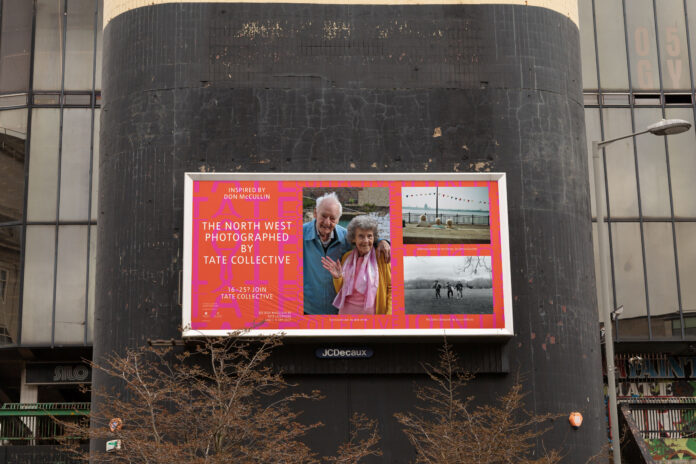 YOUNG CREATIVES TAKE OVER BILLBOARDS ACROSS LIVERPOOL WITH TATE COLLECTIVE

From 7 April, Tate Liverpool will display 30 incredible images by young creatives capturing life in the North West on billboards around the city, showcasing the young talent from the North West and giving a glimpse into life during lockdown in the region.

Following an open call by Tate Collective, Tate’s membership scheme for 16 to 25 year olds, young creatives were invited to submit photographs in response to the gallery’s Don McCullin exhibition which features an extensive collection of images depicting working class life in Liverpool and the North during the 70s. From a staggering 200+ submissions, 30 images were selected by a group of creative professionals, curators and young people to be publicly displayed for two weeks across the city.

People will be able to see the photographs across seven billboards, including Brownlow Hill, Lodge Lane and Parliament Street, as well as digital showcase on Tate Collective’s digital platforms. All of the images depict the spirit of the North West, through its communities, culture, or landscape during the extraordinary times of the last 12 months.

Tate Collective Producers work with professionals in the gallery to curate events and opportunities for young people. With opportunities in the gallery unavailable due to COVID restrictions the producers have chosen to use the streets as a gallery. The open call was launched to support local young creatives during this challenging time who are just beginning their artistic journeys, with all selected artists paid for the use of their work.

George Jones from Liverpool, whose image Thurstaston Beach is reminiscent of the striking black and white landscapes taken by Sir Don McCullin of Somerset where he now lives, was one of the entrants who made the final selection. Speaking about his image he said: “Hopefully what Thurstaston Beach signifies is the intertwining and treasured relationship our local landscapes have with their people. Since Lockdown began in March, there is no doubt that our local landscapes have become even more significant and cherished.”

Other images reflect on the isolation of life during lockdown, such as The Past is a Foreign Country by Charlie Bird, while others celebrate the importance of family, like Barry by Amelia Jones and Jake Jervis’s True Scouse Love. Significant moments from the last year have also been captured, such as the Black Lives Matter protests in Sam Tadman’s A Flicker of Hope and Liverpool FC’s league victory in Unity is Strength by Oliver O’Callaghan.

The locations of each billboard will be posted on the Tate website, encouraging local residents to treat the city as an open-air art gallery while arts and culture venues are closed due to coronavirus restrictions, so that they can safely enjoy images of the places, people and culture they know so well. The images will also be shown in the studio at Tate Liverpool once the gallery is able to reopen later in May.

In addition to gallery discounts and £5 exhibition tickets, the Tate Collective scheme gives access to free events and creative opportunities, such as this open call.