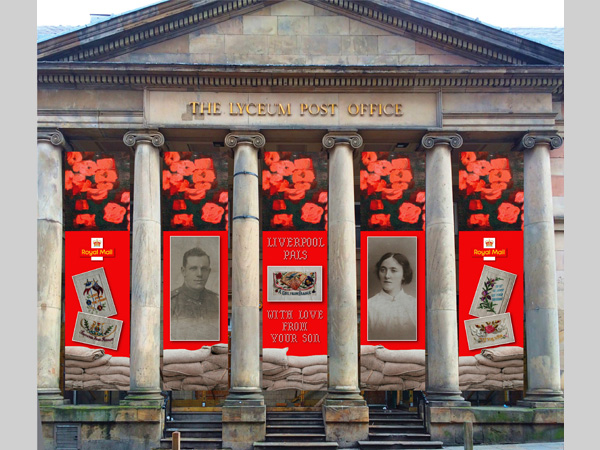 Letters and photographs from World War I are to be used in a poignant art installation that will transform an iconic Liverpool venue into a giant canvas.

Liverpool BID Company have commissioned local artists to reflect ‘the human story of the war’ in time for the centenary of The Battle of the Somme, by using an archive of letters from soldiers to their loved ones held at Liverpool John Moores University.

The giant commemorative artwork is to animate The Lyceum, a Grade II* listed building on Bold Street, which for many years was a post office and is currently vacant.

Designed by The Sound Agents: John Campbell and Moira Kenny, the installation will see five 14m high panels fixed between the building’s Doric columns and will also incorporate a poppy motif as a tribute to the fallen as well as a salute to the Weeping Window installation that adorned St George’s Hall, which attracted more than 350,000 people over the winter.

The project was devised as part of Liverpool’s Healthy High Street programme, which aims to increase footfall and reduce the number of vacant units in the city centre, and subject to planning approval could be installed by mid-May 2016.

Michael Doran, Communications Manager for Liverpool BID Company, which is co-funding the project via a levy raised on city centre businesses, said: ‘’There are so many untold stories about World War I and the reaction to the poppy installation at St George’s Hall inspired us to look at how we could bring them to life.

‘’Once we heard about the letters archive and knowing The Lyceum was a former post office there was only one place we wanted to do this and we’re delighted that the owners have given it their full support.

‘’It will provide a perfect canvas to tell the truly astounding story of how our soldiers were able to communicate under unimaginable conditions, which in our digital age seems like a different universe.
‘’We’re delighted to be working with the Sound Agents as they have a brilliant track record in dealing with such sensitive material and creating powerful images.’’

Moira Kenny, of the Sound Agents, which recently produced ‘Opera for Chinatown’ an installation to celebrate the Chinese Community on Duke Street, said: “The communication between soldiers and loved ones was vital to frontline moral. Over 2 billion letters were sent and received during The Great War, connecting the men to the homes and families they left behind, leaving a legacy of vital documents depicting their personal experiences from the trenches.

“We are looking forward to using the archive at JMU to create the art work using a number of the images to tell a compelling story.’’

The Liverpool JMU archive is held online at http://www.merseyside-at-war.org/

Mayor of Liverpool Joe Anderson, who is supporting the project, said: ‘’We were truly overwhelmed by the response to the poppies at St George’s Hall but it is important that Liverpool continues to commemorate the events of World War I as so many people from this city paid the ultimate sacrifice.

‘’For their families the only thing they had to remember them by was their letters and how our soldiers managed to pen and send them in truly horrific conditions is a minor miracle. We are fortunate in Liverpool to have such a precious archive that has recorded their stories for us all to see what war truly means.

‘’I hope by using The Lyceum in this compelling way we manage to put a spotlight on this very human aspect of the war and in doing so remind everyone that this city will never forget those who never returned home.’’

On Nina Edge by Alex Hetherington