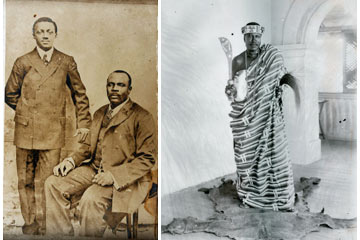 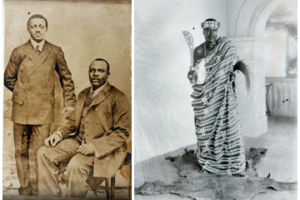 A new display at World Museum shows photographic portraits of some of the West Africans who made donations to the museum between 1897 and 1916.

Almost eighty Africans are known to have donated more than 500 objects to World Museum. Their donations helped to create one of the most important historical collections of African cultural artefacts in Britain.

Most of the images were taken by West African photographers. All the donors were friends or contacts of Arnold Ridyard, the steamship engineer who transported their gifts to Liverpool.

Ridyard was a prolific collector himself. He brought an astonishing total of 6,450 artefacts and natural history ‘specimens’ to the museum in Liverpool while serving as Chief Engineer with Elder Dempster & Company’s West African shipping service.

Little is known about some of Ridyard’s West African friends and collaborators, but Zachary Kingdon, Curator of African Collectionsat World Museum, is helping to uncover their forgotten stories through his current research.

The Art Gallery is Proud to Announce its Opening!

St Brides – In An Ideal World

Bluecoat celebrates the past, present and future of their creative community