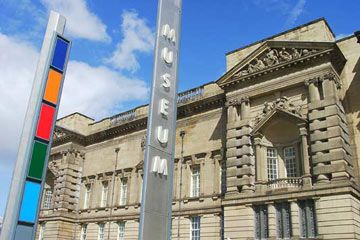 Christmas came early at the World Museum when the venue was named the best day out for families in the North West in an award voted for by the public.

The Museum based in Liverpool’s St George’s Quarter was shortlisted against four other family attractions in the recent Family Go Live Awards, which celebrate Liverpool’s best schools, days out and restaurants, as well as other kid-friendly venues and entertainment for families with children under 12.

With so much on offer, from the Bug House and Aquarium, to the Planetarium and Ancient Egypt exhibition, it’s easy to see why the public chose World Museum to win the award. And best of all, it’s completely free.

Steve Judd, Director of World Museum said: “We’re very proud to have won this award, particularly as it’s been voted for by the public. World Museum is a fantastic, fun place to be, and behind all that fun is an opportunity to learn about things that have shaped the world we live in.

2014 has been an exciting year for World Museum, with the opening of Sssnakes Alive!, which will continue until 22 February 2015. This exciting exhibition has been fascinating visitors since it opened, allowing people to explore the biology and habitats of these amazing reptiles, while getting up close to live snakes including a boa constrictor and a royal python.

Maya: the revelation of an endless time will open on 21 May 2015 and visitors will discover the powerful and revealing world of Maya. The ancient Maya was a Mesoamerican civilisation that left a far-reaching legacy of architectural, cultural and artistic achievements.

This was a period of warriors, shamanic rituals, human sacrifice, jade treasures, advanced knowledge and veneration of the cosmos. More than 400 stunning objects from museums and Maya sites in Mexico will go on display.

Beyond The Beaten Track to celebrate and secure a Liverpool grass...