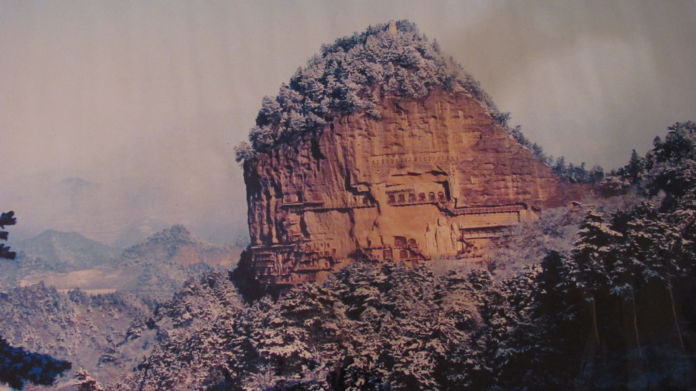 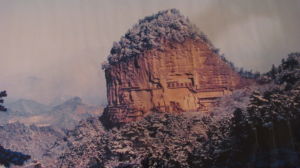 One of the North West’s smallest galleries has scored a major coup by exhibiting for the first time outside China, the amazing work of artist Xiaodong Yang, the keeper of one of the cultural treasures of the Orient – the Grotto Art of the Tianshui Mountain caves.
The paintings exhibited at View Two Gallery in Mathew Street, Liverpool, have toured Beijing, Shanghai, Xi’an and other major Chinese cities. This, though, is the first time these stunning works have been on show outside China.
The network of almost 200 caves, carved into the mountain in Gansu Province by Buddhist monks 1,600 years ago, are the workplace of Artist Yang. For almost two decades he has had the task of painstakingly copying around 200 paintings, originally painted on the walls and ceilings of the caves over around the year 400AD.
The murals remained hidden until the middle of the last century, but over time many have faded or crumbled through weather and earthquakes.
Yang is making exact replicas of each of the murals so the works will be available for future generations.
For Yang, work means climbing up the side of the mountain, facing loneliness and poisonous cave-swelling snakes as he does his paintings.
Most of the caves are closed to the public, making Xiao Dong Yang’s works even more precious.
One of the paintings at View Two took Yang over 18 months to complete. It is seven metres long and two metres wide.
Gallery owner, architect Ken Martin said: “It is an amazing honour for View Two to display Yang’s work, especially as his work has never before being shown outside China.
“Luckily in Liverpool we have a Chinese architect/artist, Miss Xia Lu, a friend of Yang since they attended the same school in Gansu Province. When it became apparent Yang was available for a short exhibition of his paintings, at very short notice, View Two was asked to curate the event. Yang was aware of Liverpool’s cultural tradition and was most happy to come to our city.”
Xiaodong Yang is aged 40 and was born at Tianshui, Gansu Province. After graduating in art from Longdong Institute in China he specialised in traditional Chinese painting until he joined the Art Research Group at the Institute of Maiji Mountain Grotto Art.
For 17 years he has devoted his life to making replicas of the treasures murals.
Yang said: “We are trying hard to protect and preserve the original murals but many have faded. I work eight hours a day in the caves, carefully making copies of these wonderful works. For me the passion for the grottoes makes my work a labour of love. At last we have faithful copies of artworks dating back sixteen centuries.
It is thought Monks travelling the Silk Road chose the mountain as a temple and place of worship when they brought Buddhism to China from India around 400AD. The caves were decorated with carvings and colourful murals, mainly from the late Qin Period (384AD-417AD)