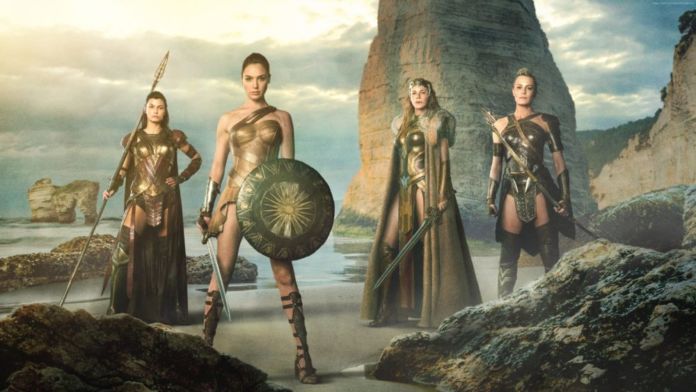 The kick ass Amazon warrior leather armour from Wonder Woman is going on display for the first time as part of an exhibition of the film costumers and designers, Whitaker Malem, at The Gallery Liverpool.

Explore 30 years of a creative partnership, The Gallery Liverpool displays the work of London leather designers Whitaker Malem in their first solo exhibition. Featuring archival pieces from their film costume work, including this summer’s hit movie Wonder Woman -alongside fashion pieces. The event will also premiere new art works by Whitaker Malem- fusing together the worlds of fashion, art & film as is presented in conjunction with Duo vision, Homotopia & Arts Council England.

‘Pop Artisans’ opens 18th November – 10th December with free admission to the public. It offers a unique opportunity to better understand the current relationship and interaction between fashion design and film costume. Film fans will be able to see close-up a selection of film costume pieces from the Whitaker Malem archive.

Including: Amazon warrior metallic leather armour from Wonder Woman-which according to The New York Times “has emerged as a breakout fashion star in its own right”.  Lindy Hemming, the film’s costume designer, having told producers that ‘’I know the best people in the world to do the amazon’s armour’’ commissioned prototypes at the pairs North London home and studio. Wonder Woman could be considered the ultimate Whitaker Malem movie project- they worked closely to the body to create a sexy/athletic armour look (most film armour being bulky). The costume armour draws heavily from the style & technique of Whitaker Malem’s fashion work & sees the evolution of what could be considered almost a ‘house style’ for movies beginning with Eragon & through Warner Bros. Harry Potter, Jack the Giant Slayer & Eva Green’s armour for 300: Rise of an Empire.

There will also be the opportunity to see selected pieces and process material from:   Captain America: First Avenger, Batman: The Dark Knight Trilogy, 007: Die another Day.

Whitaker Malem began life as a fashion house in 1988, focusing on leather. The pair met by chance at a house party in London in 1986; Patrick Whitaker was studying fashion design at Saint Martin’s School of Art and Keir Malem was working at the Tricycle Theatre in Kilburn, London. The couple first worked together when Keir helped Patrick with his degree show collection in 1987- which featured a formed leather bustier.

After two runway collections and dressing pop names such as Paula Abdul, Cher, George Michael and Bros. and selling their collection in Los Angles, New York, Paris, London and Hong Kong, the two struggled to make ends meet and moved into collaborations with other fashion designers.

Whitaker Malem pieces have been photographed by Herb Ritts, Helmet Newton, Mario Testino and Pierre et Gilles and featured in Vogue, Elle, V magazine, The Face and Love Magazine. A selection of these images will be featured in the exhibition.

The Reader: The The Oriel Singers in Concert