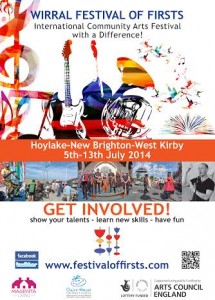 This Thursday 20 February sees the first tickets for Wirral Festival of Firsts 2014 go on sale.

There are dozens of other ticketed events, with something for everyone:

A whole week of new theatre at Melrose Hall, Hoylake including world premières of Rosa by Hyacinth Sweeney Dixon and Tim by Steve Regan, the Phoenix Youth Theatre, and the finals of the Festival’s Radio Script competition.

The world première of the Wirral Mass at St Lukes Church, Hoylake.

A day of writing workshops at Melrose Hall, Hoylake with a talk by distinguished English Language “guru” David Crystal

A day of four fascinating talks at the Wro Loft, West Kirby including David Charters on Wirral, and Frankie Connor on Old Liverpool

A great programme of films including the Grow Your Own Film Fest day at Hoylake Community Centre, and Tea at the Inn featuring films by Willy Russell at Holiday Inn

The return of old favourites like the Wirral Ukulele Orchestra and the Wirral Cooperative Orchestra, and a new show by C-City and friends.

There are also many competitions now open in the build up to the opening of the Festival in July, including a a photography competition (to be co-judged by Art in Liverpool) and a call for radio script submissions.