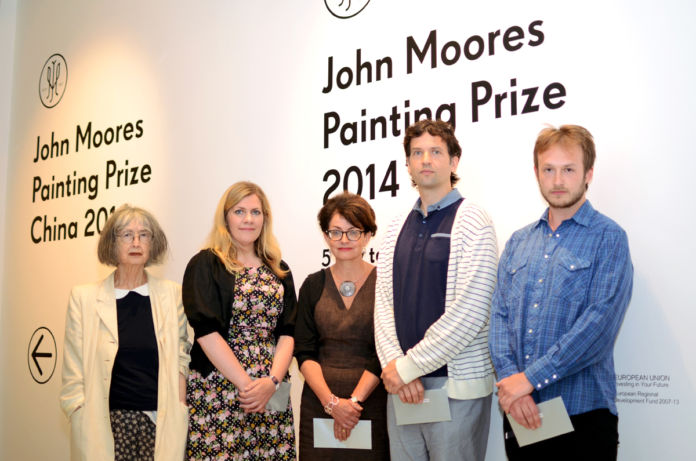 The first prize winner of the John Moores Painting Prize 2014 will be revealed on 19 September at the Walker Art Gallery.

The five shortlisted artists in the running for the UK’s most prestigious painting prize are (in alphabetical order): Rae Hicks, Juliette Losq, Mandy Payne, Alessandro Raho and Rose Wylie.

The winner of the £25,000 first prize, sponsored by David M Robinson, will join the ranks of other esteemed artists who’ve won the prize such as David Hockney (1967), Mary Martin (1969), Peter Doig (1993) and most recently, Sarah Pickstone (2012), who will be announcing this year’s winner.

The shortlisted works represent the intention of the prize to set the standard for contemporary British painting. Selected anonymously the five are an eclectic mix:

The winner of the John Moores Painting Prize 2014 will give a free talk at the Walker Art Gallery on Saturday 20 September at 1pm.

A major part of the Liverpool Biennial, the John Moores Painting Prize is a free exhibition which runs until30 November 2014. Fifty paintings (including the prizewinners) were selected for exhibition from more than 2,500 entries.

Dubbed the ‘Oscars of the painting world’, the Prize, organised in partnership with the John Moores Liverpool Exhibition Trust, has been keeping its finger on the pulse of contemporary painting for almost 60 years.

The John Moores Painting Prize is the subject of a BBC 4 documentary, presented by writer and comedian Alexei Sayle. The programme, which examines the history of the Prize as well as its place within contemporary art, will be aired in September.

Baltic Creative announces ‘significant change in direction’ as part of its...

UK museums and galleries are success story of recession