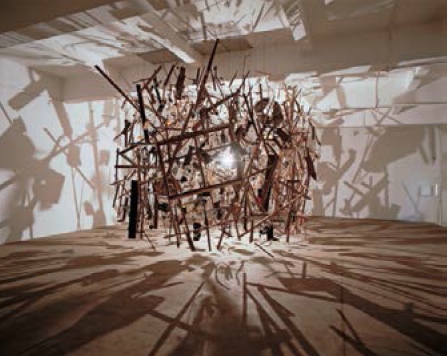 Whitworth Art Gallery, part of The University of Manchester, will reopen its doors on Saturday 25 October 2014 following a £15 million redevelopment project that will transform the 125 year old Whitworth into a 21st century gallery in the park. The redevelopment will double public space and create state-of-the-art new facilities including expanded gallery spaces, a learning studio, study centre and a collections access zone. Leading with a major solo exhibition from one of Britain’s most acclaimed contemporary artists, Cornelia Parker, the opening programme will celebrate the Whitworth’s eclectic and extensive collection of historical and contemporary fine art, textiles and wallpapers.

At the heart of MUMA’s major redevelopment project is the creation of an elegant glass, stainless steel and brick extension, which will see two wings extend into Whitworth Park from the back of the existing 19th century building. For the extension, MUMA have developed a unique Whitworth blend of British brick and a brickwork pattern with a traditional textile slash work effect, inspired by the gallery’s extensive textile collection.

Drawing on the Whitworth’s heritage as the first English gallery in a park, the new wings create an art garden between them and will be connected by a glass promenade gallery overlooking the surrounding landscape. The landscape gallery wing will provide exhibition space for the display of landscape works and large scale sculptures. Across the promenade, a beautiful linear café extends into the trees in Whitworth Park. A large window in the centre of the existing building will reveal a sight line into the main exhibition space, connecting the gallery to the surrounding park beyond.

This increased exhibition and public space will allow the Whitworth to show, share and care for its significant collection of over 55,000 historical and contemporary works. A new environmentally sustainable collection storage area will be created in the lower ground floor, including a public collections access area. Extensive refurbishment of the existing gallery building will include restoring the volume of the three 19th century barrel-vault exhibition gallery ceilings to enable the display of major, large scale shows. Visitors will also be able to access the reinstated Grand Hall on the first floor through glorious Edwardian staircases returned to public use for the first time in over 50 years.

A new Art Garden and an Orchard Garden have been designed by Chelsea gold medallist Sarah Price, who co-designed the 2012 Olympic Park gardens in London. Grasses and perennial plants in the Art Garden will keep sight lines open whilst creating a sense of depth. Loosely clipped, evergreen hedging will be arranged to form rolling, distorted clouds varying in height and shape. The hedging will be designed to look interesting from every angle and suggest partially enclosed interior spaces, creating backdrops suitable for displaying outdoor artworks.

Extending the exhibition space beyond the gallery walls, a significant number of new outdoor sculptures by artists including Christine Borland, Nate Lowman, Simon Periton and Nico Vascellari from a recent donation of 90 works from The Karpidas Foundation will go on permanent display in the Art Garden. The enclosed Orchard Garden and wildflower area will offer a place for relaxation and reflection as well as support the Whitworth’s work to promote the biodiversity of the park.

The Whitworth programme will open with a major solo exhibition from one of Britain’s most acclaimed contemporary artists, Cornelia Parker whose work invites viewers to witness the transformation of ordinary objects into something compelling and extraordinary. This extensive presentation will feature a wide range of work made during Parker’s career, including her signature piece Cold Dark Matter; An Exploded View, (1991) alongside an important new commission and recent additions to her ongoing series of Avoided Objects.

Ahead of her new Whitworth exhibition, Cornelia Parker has also been collaborating closely with scientists at The University of Manchester, most notably Kostya Novoselov, who, with Andre Geim, was awarded the Nobel Prize for his work on graphene – the thinnest and strongest known material. Working with a paper conservator, Novoselov took microscopic samples of graphite from drawings in the Whitworth’s collection by William Blake, Turner, Constable and Picasso as well as a pencil-written letter by Sir Ernest Rutherford (who split the atom in Manchester). He then made graphene from these samples, one of which Parker is making into a work of art, a Blake-graphene sensor activated by breath which will set off a firework meteor shower in Whitworth Park on the opening night of the exhibition.

Alongside Cornelia Parker, the opening programme will celebrate the Whitworth’s eclectic and extensive collection and bring together the best historical and contemporary fine art, textiles and wallpaper, including:

• An exhibition celebrating Whitworth People whose lives and relationships brought the gallery and the collection into being and continue to make the collection live, including Francis Bacon, Lucian Freud and Sir Stanley Spencer, as well as some key figures from the Musgrave Kinley Outsider Collection, held at the Whitworth.

• A selection of images from leading photographer Johnnie Shand Kydd’s extensive portfolio, which capture YBAs (Young British Artists) during the 1990s amongst other familiar art world figures on yearly trips to the Greek island of Hydra at the invitation of the art collector Pauline Karpidas.

• An exhibition of works presented to the Whitworth by the owner of the Manchester Guardian (now The Guardian), John Edward Taylor, including works by three of the best exponents of watercolour: 22 works by J. M. W. Turner, seven by William Blake and four by John Robert Cozens.

• Paintings, prints and sculptures from the 1960s, the last great moment of expansion of the Whitworth, reflecting a uniquely British artistic perspective, including pieces by Peter Blake, Allen Jones, Bridget Riley, Peter Phillips, Richard Hamilton, Colin Self and Elizabeth Frink.

• An exploration of green and all of its associations through works by artists and designers such as William Morris, C. F. A. Voysey, Lucienne Day, Keith Vaughan, Michele Walker and Susie MacMurray brought together for the re-opening of the Whitworth’s textile gallery.

• A gallery papered with Sarah Lucas’ Tits in Space (2000) wallpaper, in which multiple pairs of cigarette-encrusted orbs float against a pitch black background. The wallpaper will form the backdrop to a selection of sculptures by the internationally renowned British artist.

• An installation of Low Tide Wandering, by leading German artist Thomas Schütte, whose daily etchings will be suspended just above head height from taut wires encompassing the whole gallery.