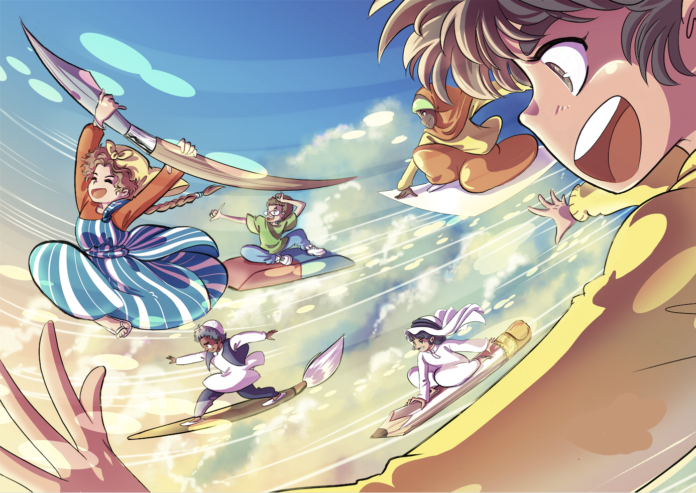 The UK’s biggest annual celebration of Arab culture encourages guests to ask themselves ‘What do I know?’ as it reveals its 20th anniversary festival theme.

Liverpool Arab Arts Festival (LAAF) has revealed its packed programme of diverse events for the 2018 edition, which features The Shroud Maker, a dark new satire by Ahmed Masoud, a ground-breaking production of At Home in Gaza and London, where a mix of live-streaming and recorded video bring performers in Gaza and London together and the UK premiere of documentary film Science in Exile.

Also premiering at LAAF 2018 is new performance piece What Do I Know? Taking inspiration from the poetry of Liverpool/Yemeni spoken word poet Amina Atiq and starring acclaimed composer and singer/songwriter of Syrian Sephardi heritage, Ana Silvera, the performance looks at the effects of war in Yemen and provides the foundation for the theme of 20th anniversary festival.

Challenging and hopeful, the theme encourages festival audiences to step away from the assumptions made around Arab life and explore its reality through the lived experience, expressed through diverse art forms of music, dance, visual art, theatre, film and spoken word.

Located in London, Liverpool and the West Bank, and inspired by Palestinian poet and author Mahmoud Darwish’s poem ‘Under Siege’, the collaboration addresses global concerns about migration, the lingering flight of refugees, as well as the isolation of disabled and bereaved people.

The launch of the exhibition will be followed on Sunday 8 July by a conversation with Gadsden at Open Eye Gallery, where she will discuss the artworks, which have been inspired by the challenges and the beauty of the culturally rich Palestinian landscape.

LAAF will also welcome British Libyan artist and graphic novelist Asia Alfasi to the Bluecoat Artist Studio from Saturday 7 July to Wednesday 11 July, as the festival’s Artist in Residence.

Alfasi will showcase pieces inspired by her childhood in Libya and her visits to the country during and after the recent revolution as well as creating new works that provoke cross-cultural dialogue.

She invites visitors to join the conversation through a series of workshops on Saturday 7 July, as part of the Bluecoat’s festival family workshop event, and at drop-in sessions throughout her residency.

Bringing the experiences of refugees to LAAF, the Tented Dreams exhibition (Saturday 7 July – Friday 13 July), facilitated by Souriyat Across Borders, will feature a small selection of prints of the works of Syrian artist Mohammed Amari, who fled devastation of the civil war conflict in his country with few worldly possessions, including his watercolours.

His moving paintings will be showcased alongside original artworks by refugees from the Za’atari Refugee Camp in Jordan, with whom he has been working as a volunteer art teacher. The refugees have used the material from their old tents as their canvas, painting images that reflect their current situation, suffering and emotional turmoil, as well as their hopes, dreams and aspirations

Showcasing the rich tapestry of Arab culture, LAAF will enthral audiences with performances by Brotha from Another Motha on Friday 13 July. The contemporary dance company will delight unsuspecting audiences with pop up performances of solo dance M. A. K. T. O. U. B and duo piece Shine My Blind Way at the Sugar House Steps in Liverpool ONE.

Born out of the Tunisian revolution, Brotha From Another Motha was founded as a way of providing a creative outlet for young Tunisians in the wake of the Arab Spring, but now includes members from across the globe. The group champions dance and creativity as a means of freedom and expression that crosses borders.

There will be storytelling from the Arab world and exciting hands-on workshops suitable for all ages, including drawing workshops with LAAF’s Artist in Residence, Asia Alfasi.

On Saturday 14 July Story Spinning at the Everyman Theatre will see LAAF storyteller in residence Alia Alzougbi leading a practical workshop for adults of any age.

Beginning with a story by Alia, participants will then share and reflect on their own life stories. The workshop will conclude with a storytelling by Alia using material gathered from the day.

Bringing the festival to an uplifting close will be the highlight of the family programme – LAAF Family Day at Sefton Park Palm House. The ever-popular event will be back and bigger than ever, showcasing some of the hottest talent in Arab music along with cultural cuisine, traditional crafts and fun activities.

Musical performances for 2018 include Simo Lagnawi & Gnawa London, who will bring the music of formerly enslaved black Africans to life, celebrating its unstoppable expression of freedom and liberation. The London Syrian Ensemble, a collective of some of Syria’s finest musicians based in the UK, return to the festival for a second year to perform with special guest vocalist Osama Kiwan, while boundary breaking Danish-Palestinian percussionist Simona Abdallah will also bring the beat of her Arab Darbuka drum to Family Day, performing a fusion of ancestral Arabic rhythms, House, and Electronica – with more performances still to be announced.

Along with these exciting live performances there will also be engaging family activities including face-painting, children’s crafts and interactive sessions with LAAF’s storyteller in residence Alia Alzougbi, who will be sharing folktales from the Arab world.

Curated by LAAF – an Arts Council England National Portfolio Organisation – and associates, the impressive 2018 line-up continues the festival’s mission to provide Arab arts and culture with an international platform, bringing diverse groups of people together and increasing the public’s knowledge and appreciation of Arab culture and its people,

Launching LAAF 2018’s theatre and spoken word programme is the premiere of What Do I Know? presented in collaboration with ice&fire theatre at the Philharmonic Music Room (Sunday 8 July), with a discussion with the cast and creative team after the show.

On Monday 9 July and Tuesday 10 July, Station House Opera and Artsadmin bring At Home in Gaza and London to LAAF. Funded by National Lottery through Arts Council England and the Arab Fund for Arts and Culture (AFAC), the performance follows the lives of people in two locations separated by great political, economic and physical divides and invites the audience to explore ideas of home and the hidden realities of life in two locations, 2,000 miles apart.

The Shroud Maker by Ahmed Masoud, starring Julia Tarnoky, will come to Unity Theatre on Saturday 14 July. The play shares the story of Hajja Souad – a character loosely based on a real-life person still living in Gaza today. The play depicts how the 80-year old woman has survived decades of wars, deportation and oppression by making and selling shrouds for the dead, profiting from the continuous Israeli attacks.

Science in Exile explores how recent violence in Syria, Yemen and Iraq has threatened the lives of four researchers, forcing them to suspend their work and flee their homelands.  Challenging the common stereotypes of refugees from a war-ravaged region, Science in Exile finds women and men with years of training and experience struggling to find a safe haven in new lands.

Documentary It’s Only the Beginning follows six Arab women filmmakers from different countries as they meet in Berlin in the aftermath of the “Arab Spring”.

Invited by two mutual friends, the directors of the film, to screen their own work and get together, the film documents the women’s emotional reunion. As they journey through the streets of Berlin exchanging feelings about what they witnessed, they reflect on how both their lives and their work as filmmakers were impacted during this most convulsive period.

On Thursday 12 July, BBC Arabic Festival Film Evening will return to LAAF with the winner of the festival’s ‘Best Feature Documentary’ award, Those Who Remain, followed by a post-screening discussion at Picturehouse at FACT.

The feature-length documentary from distinguished director Eliane Raheb is set in Al Shambouk, one of the highest mountainous areas in Lebanon. Located in the Akkar heights, just few kilometres away from Syria, it is the homeland of 60-year-old Christian farmer, Haykal and the location of the farm and restaurant he has decided to build.

In the documentary Haykal deals with neighbouring quarries and the agricultural stagnation, in addition to the repercussions of the Syrian crisis on the political and economic situation, all while building his new home and defending his coexistence in Lebanon.

Taher Qassim MBE, Chair of Liverpool Arab Arts Festival said: “Our festival has come a long way since it was founded in 1998 and this year’s festival theme ‘What do I know?’ allows us to reflect on where we have come from and what we have learned during the past two decades.

“We invite all people from all walks of life to join this year’s incredible range of artists to celebrate the vibrant and diverse Arab cultures and art forms and ask themselves in reflection, what do I know now about Arab life?”

Jane Beardsworth, Director North, Arts Council England, said: “Liverpool Arab Arts Festival has celebrated to Arabic culture for 20 years and I’m delighted that the Arts Council continues to support the festival as part of our 2018-22 National Portfolio. Local communities and visitors are introduced to a wide range of arts and culture, including theatre, dance, music and visual arts, and I’m sure that this year’s programme will bring an even wider audience to the festival.”

For more information on LAAF 2018 www.arabartsfestival.com

Former Cinema to be Biennial Hub