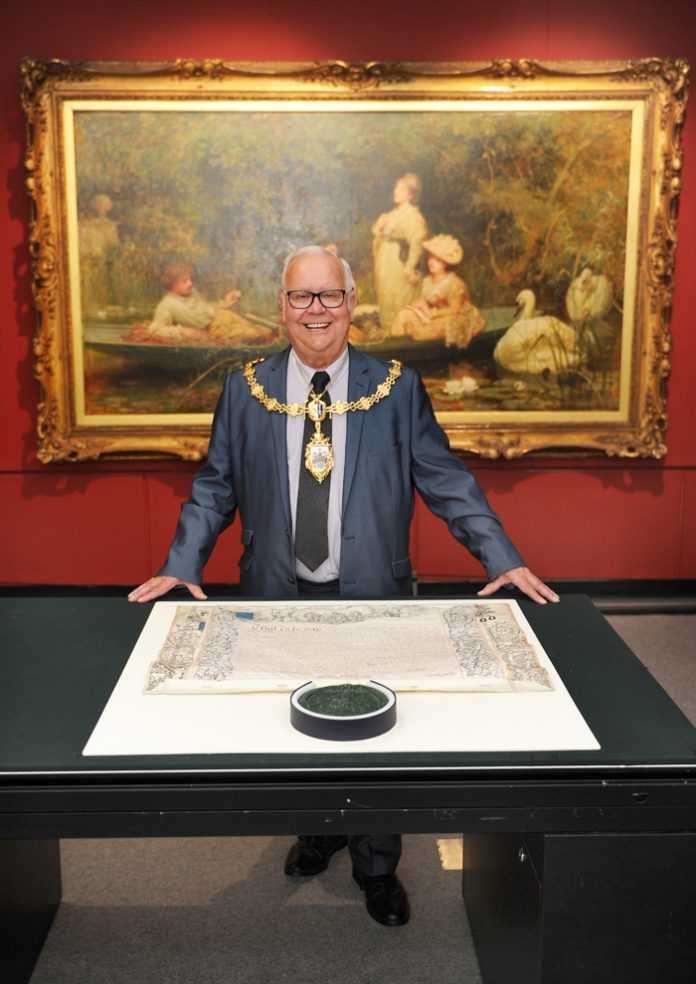 Warrington’s new mayor has given Warrington’s UK City of Culture 2021 bid a boost, launching a new display at Warrington Museum & Art Gallery which celebrates the 170thanniversary of the modern town of Warrington.

Cllr Les Morgan stood proudly in the Museum – which features a statue of Warrington’s first mayor, William Beamont – as he unveiled Warrington’s Borough Charter – which was granted to the town by Queen Victoria in 1847.

The new exhibition provides a rare chance to see the original document, which is usually kept within the archives of the Cheshire Record Office.

Mayor of Warrington, Cllr Les Morgan, said: “I’m delighted that Warrington is marking this key historic milestone in the same year that we bid to become 2021 UK City of Culture.

“Cultural investments will bring enormous benefits to the region, but what is equally important, is that residents and visitors are able to access and celebrate Warrington’s history and heritage at the museum, which plays a key role in our cultural offer.”

The charter was granted to the town following a petition sent from the then lawyer, William Beamont, to the Queen, asking her to set up a new elected body to govern the town following its expansion during the industrial revolution.

Thanks to Beamont’s petition, on 3 April 2017, Warrington received its royal charter -with the Queen’s official seal fixed at the bottom creating the new borough.

The charter set out the borough’s boundaries – within the counties of Lancashire and Cheshire – and described the new system of local government and how this was to be elected.

The first council elections were held on 1 June 1847 and William Beamont was elected as Warrington’s first mayor soon after.

Janice Hayes, heritage manager at Culture Warrington, the charity that runs the museum, added: “The charter and its regulations helped develop Warrington into the thriving town it is today.

“Before it was granted, Warrington was growing rapidly in size but had no proper water supply, sewers, street paving, or street lighting but growing poverty and crime rates, and poor housing.