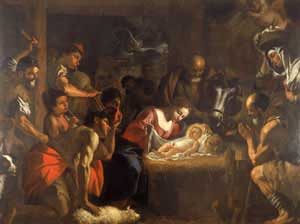 ‘The Adoration of the Shepherds’, by Mattia Preti

This painting illustrates the events described in the Gospel of St. Luke, chapter 2, verses 15 – 17:

‘When the angels went away from them into Heaven, the shepherds said to one another ‘Let us go over to Bethlehem and see this thing that has happened, which the Lord has made known to us ‘ And they went with haste and found Mary and Joseph, and the babe lying in a manger.’

In the eighteenth century this picture was in the collection of a Neapolitan nobleman. In the early nineteenth century it became part of the collection of the Liverpool Royal Institution. It was one of a group of four paintings by Preti given to the LRI by a group of eleven ‘public spirited gentlemen’ in 1829. The pictures were presented to the Walker Art Gallery in 1948.