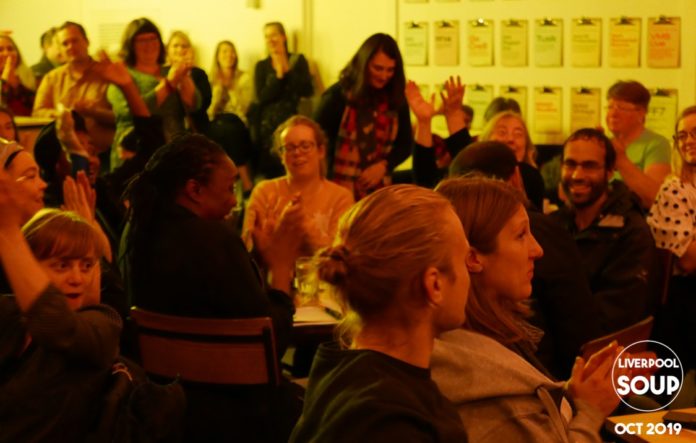 In Spite of Lockdown, Community Spirit is Thriving

Liverpool SOUP has traditionally hosted ‘in person’ events which bring people together to learn about the inspiring projects going on right on their doorsteps and how to support them. Over their last three events they’ve crowdfunded over £1,800 which has been awarded to a variety of projects from a community film club to a beekeeping start-up. But given that they can’t guarantee the date of their next event they’re taking it online…

Liverpool SOUP Online showcases six projects who are doing amazing things across the Liverpool City Region, engaging and connecting communities despite current restrictions. They have all been awarded £250 to support the success of their project and voting is currently open to the public to decide which one receives an additional £500.

The broad range of projects which have been shortlisted evidence the true creativity and community spirit alive across the Liverpool City Region from remote cookery classes to reduce the symptoms of stress and anxiety in men to letter exchanges with mythical creatures to support families wanting to increase their screen-free time to radio stations dedicated to providing comfort to those living with dementia to name but a few!

Liverpool SOUP events are all about teaching the wider community about projects which are making such a positive impact to their neighbours across the city, enabling them to support them easily and this event (although online) is no exception. Each of the projects have a short pitch video outlining what their project is and how £500 would be put to good use, it costs nothing to vote and Liverpool SOUP have worked with each of the projects to establish a way for them to receive direct donations if people would like to support them above and beyond giving them their vote.

In research carried out on behalf of The National Lottery Community Fund “digital issues were outweighed by other more fundamental challenges. However, this has changed considerably since physical distancing measures have come into effect — digital tools have become vital for micro organisations to continue to function during this time. This has brought with it a need to learn new digital skills and online tools.” Liverpool SOUP Online rallies support for communities across the Liverpool City Region by helping them access a larger online audience to spread the word about the incredible work they’re doing, which is particularly valuable when this isn’t a channel they’ve had to rely on in the past. The project which has received the most votes will be announced Thursday 7th May and there are soup recipes online for anyone who would like to join the Liverpool SOUP community in spirit. In the run up to the 7th May you can receive updates, including seeing a Q&A sessions with each of the projects, via Liverpool SOUP’s Facebook and Twitter accounts. We suggest that you grab a brew and watch a few of the pitch videos before mulling over who to vote for, it’s truly awe-inspiring to hear about the brilliant and creative ways people are coming together to create connections despite current uncertainties.

Prams and Pushchairs Welcome at The Walker