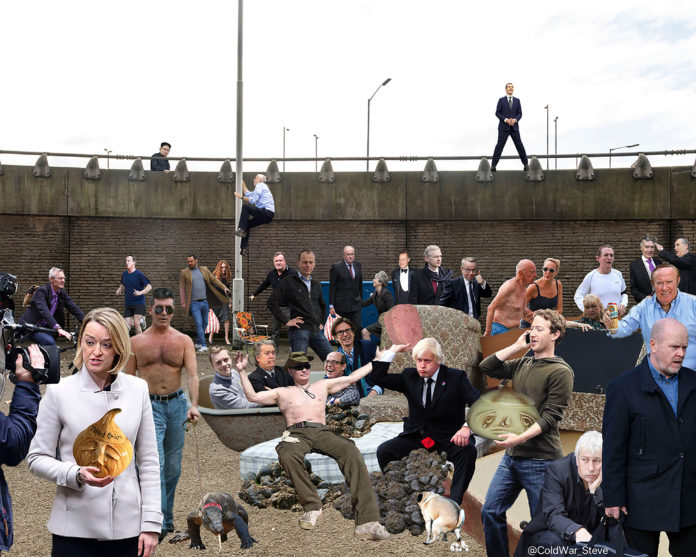 The satirist, an almost overnight twitter sensation – described by author Jon Savage as “a modern Hogarth or Gillray” has produced a new, huge scale visual landscape of the UK news media, titled “The Fourth Estate”. The piece will be unveiled in Williamson Square, Liverpool on 09/11/18.

The billboard will be similar in tone to the iconic twitter feed “McFadden’s Coldwar” but will include many “characters” the public may not be quite so familiar with: the owners and influencers of the UK news media. To this end, an outline index will detail those identities.

The piece was commissioned by RRU News a unique year long cultural experiment designed to interpret, create and challenge how we look at news. From March 2018, commissioned artists from all art forms (Damon Albarn, Jeremy Deller, Darren Cullen, Lubaina Himid…), paired with some of the City’s most innovative and acclaimed arts and cultural organisations (Tate Liverpool, Liverpool Philharmonic, Museum of Liverpool…), have set out to produce new artistic content inspired by the media.

“There’s a democratic value to Chris’s work that resonates with folk faster than
almost any other satire around. The comedy factor, combined with his daily cast
of characters and the constantly appalled onlooking Phil Mitchell, who seems to
represent the UK citizen looking on at the UK politics … and that no matter how
bad your personal problems are, they are nothing like the mess of Brexit Britain. Chris’s work deserves to be in the biggest public art gallery possible, so a gigantic billboard in a public city square suits it well.”