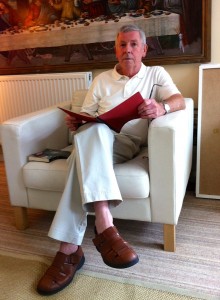 THIS acidic comedy about four best friends, one newly widowed, ran at the Lantern Theatre in February to packed houses. So generous was the audience response that John Evans is running it again at The Unity from July 18 – 20.

Missing jewellery, lively furniture and bizarre knitting projects prompt a visit to local psychic Ray Fey to demand answers. Ray reveals much more about the friends’ unshared secrets than the Liverpool ladies ever expected. ‘Is Anybody Out There’ received fabulous reviews at The Lantern and is described as ‘An achingly funny comedy about life, death and best mates.’

Playwright John Evans  writes for normal men and women who want a good night out, many of whom may not have ventured into a theatre before; he is proud that his plays have ‘taken the fear out of theatre’ and created many passionate theatregoers among those who tasted live performance for the first time at one of his productions. Richard Gardiner is directing once again, which John says ‘is an absolute honour.’

John Evans has been writing for ten years following an intensive period of study of English Language and Literature at Liverpool Community College:

He writes for ‘normal men and women about subjects to which they can relate.’

Alan Bleasedale edited two of his early works and said:   ‘Writing is a gift, not many people have it, but you do.’

The Liverpool Echo and ‘Taxi Talk’ have featured many of his works that include plays, short stories and poems. John’s plays have been performed at prestigious venues throughout the North West including: The Unity, Liverpool, The Lantern, Liverpool, The Citadel, St Helens and The Casablanca in Liverpool.

Payback, What goes around, comes around, The Ciggie run, A Land fit for heroes, A Brother’s Love, Smoking Mirrors, Gabriel, The Benefactor

Improv Dance at A Foundation TODAY

Bid for a Set of 8 Arena Art Baubles