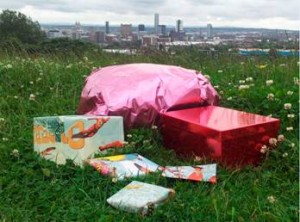 A truly unique arts festival will visit the Bluecoat, Liverpool this December. From smaller beginnings in 2011 and 2012, ‘Giving In To Gift’ returns for 2013 from 6-8 December as a fully fledged festival with live theatre, audio performances and a symposium, all exploring attitudes to giving in today’s society.

Festival producer Tim Jeeves said: “For a long time now, ideas of gift have featured in my art practice, not always consciously, and I often wonder how much this has to do with the bone marrow transplant I received 15 years ago. This work has felt even more relevant in the time since the financial crisis and the introduction of austerity measures, where, in the context of the Big Society and Workfare, there has been an increase in people being asked to do things without payment. I see Giving in to Gift as a platform through which the social relations, power dynamics, and, of course, the joy that are a part of gift-giving can be explored.”

For the live performance strand of the festival, producer Tim Jeeves will appear in a one-man theatre piece, The Kindness Of Strangers, which premieres at The Bluecoat on 7 December. In 1997, Tim was studying for his A-Levels when he first encountered Tennessee Williams’ play ‘A Streetcar Named Desire’ and the tragic character of Blanche Dubois, a woman, dangerously mismatched to her surroundings, whose eventual undoing is encapsulated in the line, ‘I have always depended on the kindness of strangers’.

A year later, in 1998, after intensive treatment for malignant tumours in his leg, lungs and liver, Tim also turned to the kindness of a stranger when he was given bone marrow by an anonymous donor. Partly a return gift to the most significant person Tim has never met, but also an exploration of how we deal with another’s generosity, The Kindness of Strangers opens a bag of marrow and – even though it might get a bit messy – takes a look at what’s inside.

For ‘If You’re Not Paying…’ the Audio Performance aspect of the festival,Giving In To Gift is looking to commission four new sound works, each made to be listened to in a specific situation, for free distribution online. These will explore the unique potential for generosity that the internet provides (massive distribution reach with minimal distribution costs), which is often rightly subject to a degree of suspicion and qualification when the privacy concerns around the business model of internet behemoths such as Facebook and Google are taken in to account. The commissioned artists will receive an artist fee, recording sessions in Liverpool, travel costs and digital and print marketing. Those interested in applying to be one of the four commissioned artists should visit: www.givingintogift.org/if-youre-not-paying/

The four commissions will be made available online on Friday 6 December, launching the festival weekend.

Rounding off the festival on Sunday 8 December, a symposium entitledGenerosities in Economy will provide an opportunity to explore the role of gift-giving and generosity in a range of fields and disciplines. The symposium will take place at community enterprise Homebaked in Anfield featuring a range of speakers who will be announced very soon.

Giving In To Gift is free to attend but ticketed. Tickets will be available from the Bluecoat in November. For more information see www.givingintogift.org

FACT Symposium – ‘Had to be There?’

Sculpture nodding to maritime culture will be the fifth on The...