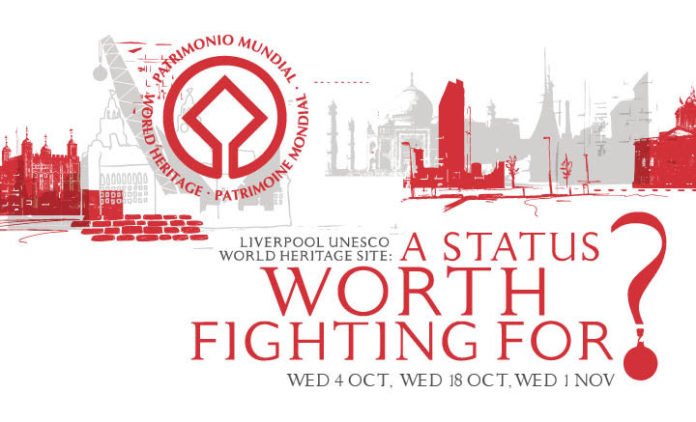 As Liverpool stands on the brink of losing UNESCO World Heritage Site status, UNESCO representatives visit the city to discuss why and give local representatives a chance to voice their concerns.

Liverpool Maritime Mercantile City has been declared by UNESCO to have features of outstanding universal value, which puts Liverpool in the Premier League of world cities. With the status under threat, our 2017 seminar series asks if we have sufficiently valued what being a UNESCO World Heritage Site confers.

Entitled “Liverpool UNESCO World Heritage Site – A status worth fighting for?”this free seminar series will bring heritage officials, including Isabelle Anatole-Gabriel, UNESCO’s Chief of the Europe and North America Unit to venues within Liverpool Maritime Mercantile City – currently inscribed on UNESCO’s List of World Heritage in DangResidents of Liverpool are being urged to register for a series of upcoming seminars that according to organisers “will make UNESCO’s voice heard publicly in the city for the first time”. With Liverpool’s world heritage status at critical risk, the series aims to give the people of Liverpool the chance to find out more, and to hear UNESCO’s perspective on why Liverpool is on a par with world famous heritage sites such as the Taj Mahal, the Acropolis, and the Great Wall of China, as a site of “outstanding universal value”.

Organised by Engage Liverpool CIC, a social enterprise that seeks to make a positive contribution to the liveability of Liverpool City Centre and Waterfront, the autumn seminar series is entitled “Liverpool UNESCO World Heritage Site – A Status worth fighting for?” and will bring heritage officials to three seminars to speak of their own analysis of what Liverpool is doing wrong to leave it within critical risk of losing its status of world heritage whilst talking to a panel of local representatives about what the city can do to maintain its cultural crown.

Seminar One will feature Isabelle Anatole-Gabriel, UNESCO’s Chief of the Europe and North America Unit in Liverpool Town Hall on 4th October where the overarching question will be “UNESCO World Heritage Site – What’s it all about?” before seminar two introduces Michael Tuner, UNESCO Chair in Urban Design and Conservation Studies at Bezalel Academy of Arts and Design, Jerusalemto pose the question “Why the conflict?” on 18th October at Museum of Liverpool. The final seminar will be held on November 1st in St George’s Hall where Minja Yang, Former UNESCO Deputy Director & Coordinator WH Cities will speak on the subject of “Where’s the value?”

Liverpool was inscribed as a WHS in 2004 covering six areas of Liverpool’s city centre and docklands. The award was made in recognition of the city’s global significance as one of the world’s major trading centres in the 18th and 19th centuries, and also for its part in the development of mass movements of people.
However, UNESCO and The International Council on Monuments and Sites (ICOMOS) have warned that redevelopment in the area – including the Liverpool Waters scheme – “would fundamentally adversely affect the Outstanding Universal Value of the property”. Liverpool is now one of only two endangered UNESCO sites in Europe.

The first seminar starts with refreshments at 17.15 and the speakers commence at 17.50.

Gerry Proctor, Chair of Engage Liverpool CIC said “With time running out for Liverpool, we are creating an urgent civic conversation asking if we have sufficiently valued the status that being a UNESCO World Heritage Site city confers”

“UNESCO’s voice has never been properly heard in the city, except perhaps in negative ways. In bringing three UNESCO representatives to Liverpool, alongside a local panel of specialist speakers and councillors, we aim to generate discussion that considers both the potential impact of the loss and what could be gained from development and conservation working together.”

Those wishing to register for the seminar series can do so at www.engageliverpool.com or begin by booking a place at the first seminar at https://www.eventbrite.co.uk/e/unesco-world-heritage-site-whats-it-all-about-tickets-33695315596?aff=erelexpmlt

Call out to Warrington communities to take part in national creative...

From elitism to engaging, how the art industry is evolving in...