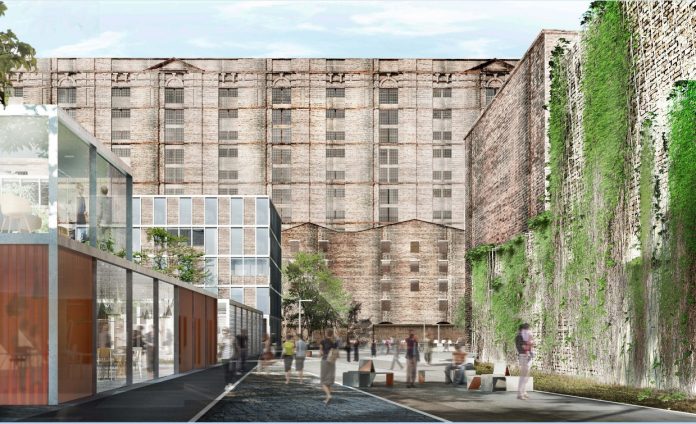 A major performance venue, with a revolving auditorium, will be at the heart of regeneration plans for Liverpool’s new creative district.

The new music and theatre venue will be the UK’s first-ever Stage-Around Theatre, based on the hugely successful performance space in Amsterdam.

The stunning venue will be part of a multi-million pound programme to attract creative businesses to the Ten Streets district which is forecast to create an estimated 2,500 new jobs over the next decade.

The Ten Streets vision was unveiled this morning, at the Titanic Hotel, by Mayor of Liverpool Joe Anderson to mark the start of a public consultation on the area’s future.

The Mayor will tell an audience of creative entrepreneurs and city stakeholders than the Ten Streets district represents “an opportunity of a lifetime to redefine Liverpool’s future as a creative powerhouse of the 21st century”.

The vision for the district, which contains a mix of historic dock warehousing and industrial buildings, is for an area where tech companies, digital businesses and creative enterprises can flourish alongside artistic organizations – becoming a truly distinctive, inventive and vibrant new urban district.

Other key elements include adding new squares and public spaces and making Ten Streets, which covers 125 acres of former dockland between the northern edge of the city centre and the landmark Tobacco warehouse at Stanley Dock, an exemplar neighbourhood for renewable energy.

Ten Streets is part of the city’s big picture regeneration vision that will deliver £11 billion investment and create 40,000 new jobs in total over the next ten years. As a creative economy district, Ten Streets will complement other employment areas like the Knowledge Quarter, Commercial District and Liverpool Waters.

The Ten Streets vision is being launched to engage local businesses, stakeholders and the wider public in a debate about the area’s future. At this stage, there are no detailed proposals and work on a masterplan for Ten Streets will be informed by the ideas, comments and feedback generated during the month-long consultation campaign.

The starting point for the consultation are Ten Big Ideas, encompassing such themes as innovation, culture, growth, connections and collaboration, that will provide a broad direction for future policy and an emerging vision.

Mayor Anderson said: “The launch of this vision for the Ten Streets district is an opportunity of a lifetime to define Liverpool’s future as a creative powerhouse of the 21st century.
“For me, this new theatre says everything about our ambition for Ten Streets and how the creative sector can unleash the untapped potential of these once celebrated docklands and make them once again a beacon of economic growth.
“The partners involved are of the highest calibre and much like with the Knowledge Quarter, Ten Streets will generate high value jobs and stimulate our economy for decades to come
.”

The city council has already made a big commitment to improving transport infrastructure in the area and currently investing £30m in upgrading the A565 and Regent Road and is in talks to establish new rail connections.

Mayor Anderson will be joined at the launch by Pat Power of Irish property company Harcourt Developments who are the city’s development partner on the project. They have already delivered the hugely successful Titanic Hotel and are on site with the redevelopment of the landmark Tobacco Warehouse at Stanley Dock.

Pat Power commented: “Liverpool is a young vibrant city with a multitude of colleges and universities that provide a strong base of creative organisations and businesses. It is an exciting city to live in and has some of the lowest business costs within UK cities. For these reasons and more, Liverpool is very well placed to take advantage of the growth of the digital and creative businesses of the future, through both inward investment and local start up enterprises. Through collaboration and innovation the Ten Streets district has the potential to become an internationally recognised hub for these industries. The success of the Titanic Hotel and the ongoing redevelopment of Stanley Dock, in addition to the existing creative businesses in the area provides a great platform to begin with.  We are very pleased and excited to be involved in the regeneration of the Ten Streets district.”

Although the vision for the area is primarily as a new business and creative quarter, it is envisaged that culture, retail, appropriate scale residential development and an independent leisure offer will all to add to the vitality of the Ten Streets area.

One of the key ideas at this stage is the vision for a new cutting-edge performance venue which will build on the area’s emerging reputation as a major events destination following on from the pioneering Sound City Festival, Creamfields Steel Yard and the Kazimier team at the invisible Wind Factory.

Kees Abraham, of Stage Around, explained the unique concept: “We’ll add a new dimension to the UK and the Ten Streets offer with the first ever stunning new Stage Around theatre and music venue in the country. The cutting-edge revolving stage, which originated in the Netherlands and has had break out success inTokyo, will provide audiences with a genuinely immersive experience built around an international quality performance programme.”

The next phase of work for Ten Streets will be undertaken by the multi-award winning Paris-based architectural practice AWP whose work includes the 365 acre strategic masterplan for the Paris Central Business District.

Alessandra Cianchetta, AWP’s Founding Partner, said: “We are delighted to be part of the Ten Streets project and to have the opportunity to work in such a unique, fascinating and historic area blending old and new, treasuring Liverpool’s history and past and looking forward to the future will be a wonderful experience. We look forward to fostering a lively exchange of ideas which will help shape the physical framework to generate economic and intellectual growth.”

Key to the regeneration process will be the retention of much of the area’s historic maritime warehouses and protecting the stunning architecture which has given the district its historical identity.

The consultation and further dialogue with stakeholders will lead into the adoption of a regeneration and planning brief for Ten Streets and this framework will guide future development.