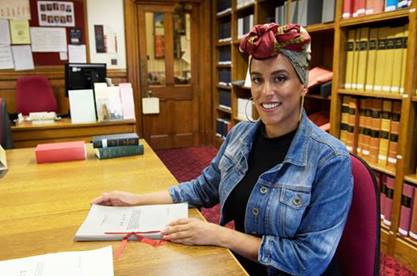 Artist Scarlett Crawford has been appointed by the UK Parliament for a new project entitled First Waves: Exploring the impact of race relations legislation in the UK.

Over the course of her artist residency, Scarlett is holding workshops at partner organisations across the country, including Bluecoat, Liverpool’s centre for the contemporary arts. The project is timed to coincide with the 50th anniversary of the 1968 Race Relations Act, which made unlawful acts of discrimination within employment, housing and advertising. It was part of a series of Acts that sought to outlaw racial discrimination in Britain.

Parliament’s First Waves artist will be holding a series of workshops in Liverpool in August 2018 to creatively capture the voices of generations who have been directly impacted by the Race Relations Acts, but who may have had little opportunity to have their voices heard in Westminster. These are taking place 20th, 21st, 22nd and 23rd August 2018 at Bluecoat, in partnership with The Greenhouse Project and Liverpool Community Spirit.

The artworks created will be exhibited in the community at the end of the year, before being displayed in Parliament for an exhibition in 2019 which will look at the impact of race relations legislation and the stories of the people who fought for change. The artworks will then be returned permanently to Liverpool and the community that inspired them.

“I welcome this important initiative to Liverpool – the world in one city. Generations of people from across the world have made their homes in Liverpool, giving this great city its vitality and diversity. It is time we reflect on the impact of race relations legislation and consider the future.”

Scarlett Crawford, First Waves artist, said:
“I’m really excited to have been chosen to creatively explore the impact of race relations legislation across the country. Working in collaboration with local communities in Liverpool I hope to discover the unheard stories of those who were affected by the changes, to honour the contributions of those who led the way, and to inspire future generations of people from all backgrounds to engage with art and politics.”

“Bluecoat has always been a space where people can access new skills and ideas through working with artists. We are excited to be collaborating with Scarlett, and our partners at The Greenhouse Project and Liverpool Community Spirit, to make sure diverse young people have a voice within the First Waves project.”