There is an exhibition at Renew Rooms in Wood Street giving full details about this amazing installation.

‘The most daring piece of public art ever commissioned in the UK’, Turning the Place Over is artist Richard Wilson’s most radical intervention into architecture to date, turning a building in Liverpool’s city centre literally inside out. One of Wilson’s very rare temporary works, Turning the Place Over colonises Cross Keys House, Moorfields, and will be launched in June 2007 and will run through until end of 2008.

Co-commissioned by the Liverpool Culture Company and Liverpool Biennial, co-funded by the Northwest Regional Development Agency and The Northern Way, and facilitated by Liverpool Vision, the project is a stunning trailblazer for Liverpool’s Year as European Capital of Culture 2008, and the jewel in the crown of the Culture Company’s public art programme.

You can watch a short visualisation here 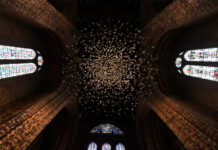 Huge Sculpture, Made from Thousands of Pieces of Coal, hangs at Liverpool Cathedral

Liverpool Art Prize – On the Radio