FACT (Wood Street) has just launched their latest exhibition, entitled Turning FACT Inside Out. The exhibition features a series of commissions exploring issues that are important to society today and experimenting with the FACT building to mark their 10th anniversary.

Here is a sneak peek at what’s on offer at Liverpool’s Foundation for Art and Creative Technology until 15 September: 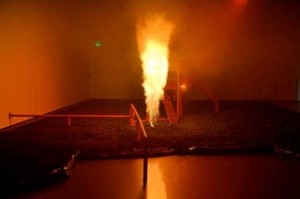 Parisian artistic engineers HeHe have turned Gallery 1 into an experimental drilling site. The environment of the gallery is transformed into an industrial landscape where boreholes are drilled and waste chemicals are treated.

Manifest.AR is an international artist collective working with new, emergent forms of Augmented Reality. The six projects commissioned as part of Turning FACT Inside Out exemplify some of the most innovative ways in which AR can be used as an artistic medium. 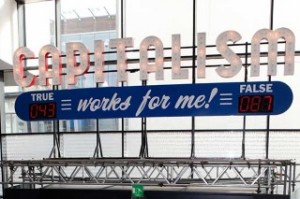 Lambert’s artwork encourages debate and discussion and reiterates FACT as a safe space for risky conversations. Put in the form of a massive, carnival-like spectacle, bright dancing lights lead us into difficult intellectual territory where the foundations of our everyday lives are called into question.

Take a virtual bike ride and explore the development of European cities through the eyes of the urban cyclist. Your journey will seamlessly move from Liverpool to Madrid. 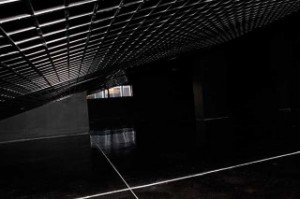 Polish artist Katarzyna Krakowiak has created an installation which opens up hidden spaces at FACT, revealing windows and extracting live and recorded sounds from lift shafts, staircases and loading bays and allowing them into Gallery 2.

Liverpool based design collective John Wood and Peter Blake responded to an open call for innovative ways to display information about FACT’s history.